The following 1902 lithograph comes from the pen of Albert Robida, the preeminent French visual futurist. This excursion to the opera in the year 2000 builds on the concepts of his famed trio of books: Le Vingtième Siècle (The Twentieth Century, 1883), La Guerre au vingtième siècle (War in the Twentieth Century, 1887), and Le Vingtième siècle. La vie électrique (The Twentieth Century. The Age of Electricty, 1890). He would return to questions of the future many times in his career, with varying degrees of success. Simply by being a more conservative cynic, he could accurately predict many of the awful and stupid applications of technology that people would find. Unfortunately, his famously piscine flying cars never did come true. Click on the image below for a larger version. 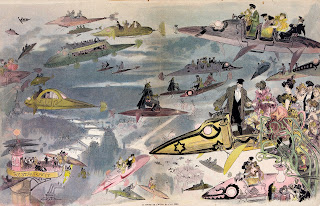