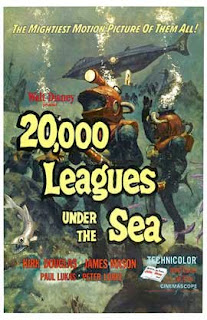 After several years of production, design and location shooting, Walt Disney released his first Hollywood produced live-action motion picture in 1954. If the advertising was to be believed, it was in fact the mightiest motion picture of them all. Considering that the film was 20,000 Leagues Under the Sea, this is a credible claim.

20,000 Leagues Under the Sea, starring James Mason as Nemo and Kirk Douglas as Ned Land alongside Peter Lorre as Conseil and Paul Lukas as Prof. Arronax, is perhaps the single most important modern film in the genre of Scientific Romance. 20,000 Leagues came to the silver screen in a post-Hiroshima, pre-Sputnik era when Atomic Age Science Fiction was the darling of young and old imaginations alike (not to mention drive-in theatre patrons). Between voyaging to forbidden planets and fighting off prehistoric monsters, filmmakers turned their attention back to the Scientific Romances of H.G. Wells and Jules Verne. The first of these was George Pal's War of the Worlds, which updated Wells' tale by placing it squarely in the modern day.

Following Treasure Island and a series of three Mediaeval historical dramas shot in England with money tied up during the Second World War, Disney sought another live-action project for production in his studios in Burbank. In doing so, he revived his childhood love for Jules Verne. His concerns, in making the film, were very much the stuff of adulthood, however.

Walt Disney and the Gay Nineties

In a 1997 exhibition of the same name, scholar Karal Ann Marling aptly described Walt Disney's theme park ventures as "The Architecture of Reassurance." Through gingerbread houses, Western stockades, futuristic rocketships, and fairy tale villages, visitors to the newly christened Disneyland in the Fifties and Sixties could find nostalgia, comfort, and hope for the future through the uncertainties of America's changing culture and global position in the post-war milieu. Complimenting Walt Disney's Disneyland, the theme park, was Walt Disney's Disneyland the television series. Each week, Walt's comforting public persona would introduce updates on the theme park, behind-the-scenes programs for newly arriving films, and reruns of past cinematic successes, each themed to a different section of the park, be it Frontierland, Adventureland, Fantasyland, or Tomorrowland. When first unveiled to the world, "Disneyland" was not merely a theme park or a TV show or motion pictures, but a state of mind. The gateway to this mentality was Main Street U.S.A. and the reassuring myth of the Gay Nineties. 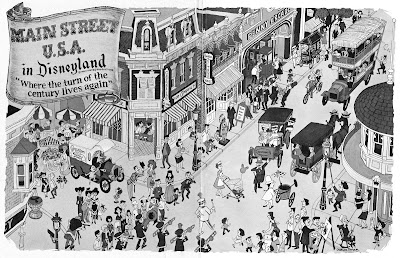