Though employed full-time as a banker and sadly shadowed in posterity, Ellis Parker Butler was one of the most prolific and popular American humourists of the early 20th century. His most famous story, Pigs is Pigs, was even adapted into a Disney animated short in 1954.

An Experiment in Gyro-Hats was originally published in the June 1910 edition of Hampton's Magazine, illustrated by Albert Leavering. In it, an inventive hat-maker takes very seriously his profession's sacred calling to improve the conditions of men and the world at large. Specifically, creating a hat designed to steady the tipsy and staggering.

As in most cases of  humourist writing, like Darius Green and his Flying Machine before it, there is less point in talking about how funny it is than in letting it speak for itself. The complete text of An Experiment in Gyro-Hats follows. 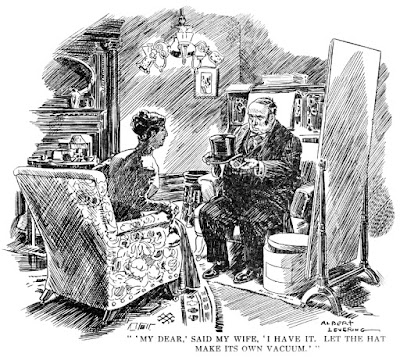 The Domestic World of Knut Ekwall

Born in Säby, Sweden in 1843, Knut Ekwall eventually came to study at the prestigious Academy of Arts in Stockholm from 1860 to 1866. His speciality was drawing and woodcut printing blocks, and through his career it was such magazine illustration work that largely kept him going. But during his tenure in Germany - Berlin, Munich, and Leipzig - during the late 1860's to early 1880's, and again in Sweden until his death in 1912, he also attained a reputation as a painter. His favourite subject matter seems to have been domestic life of the upper classes, and especially the stages and complications of romance. One could almost piece together his paintings to form a complete story from courtship and proposal to eventual widowhood, all against the opulent, tchotchke-laden background of wealthy homes.