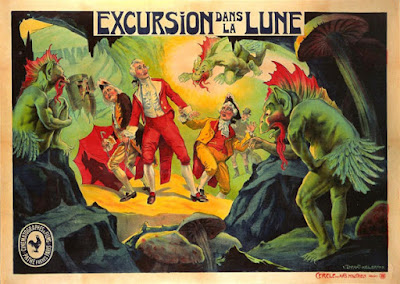 Copyright law comes and goes in waves. "Information wants to be free" say many as they illegally upload movies to shadowy servers. International trade seeks ever more uniform and pro-corporate regulations, while media companies simultaneously seek ever more restrictive censorship of individuals,  together posing what may be the greatest threats to freedom of speech and information since the rise of Communism. A century ago, the rules were much looser, with their attendant benefits and challenges. Georges Méliès was, sadly, one of the ones who lost the most from those challenges.

Méliès' classic Le Voyage dans la Lune (English: A Trip to the Moon) was the blockbuster smash of 1902, provoking a number of copyright violations. Thomas Edison, unsurprisingly, had his men smuggle copies of the film out of France, distributing them on his own in the United States without a dime going to Méliès. The French maestro's plans for an American debut were foiled, leading as surely to his financial demise as the development of the matured Hollywood filmmaking system.

Not helping was Spanish filmmaker Segundo de Chomón. Getting into film in 1901, he produced his first trick film - Gulliver en el país de los gigantes - in 1903. Pathé took notice and saw in de Chomón a competent filmmaker who could compete with Méliès. After releasing a series of his own trick films in Méliès' style, he was asked to essentially replicate A Trip to the Moon.

Like numerous remakes throughout cinema history, Excursion dans la Lune (English: An Excursion to the Moon) is serviceable. All the pieces are in the right place and, in many places, it is even more refined than the original. Knowing where all the pieces go and understanding why they go there are two different things, however. An Excursion to the Moon lacks the fanciful sensibilities of Méliès, the wry blurred line between the astronomer and the astrologer, the joviality of the etheric spheres in a romantic cosmos. Though de Chomón's star rose just as Méliès' declined, posterity has been more kind to the latter than to the former. Méliès has - rightly - been canonized that the true innovator and artiste. It takes de Chomón's own films, original in content, to showcase his own abilities and separate his legacy from that of his competitor.

By the Water with James Tissot

Born Jacques Joseph Tissot in 1836 in Nantes, France, he had already become an established artist by the time he moved to London in 1871. During that phase of his life, "James" Tissot specialized in scenes from the docks and aboard ship... Likely, he was influenced by the same seagoing culture of Nantes that also affected Jules Verne so deeply, who was himself born in Nantes in 1828. The following is a selection of Tissot's works on that theme, including his series of paintings that appear to be using the same room and same models. Click on the each image for a larger version. Without further ado...

John Jacob Astor's A Journey in Other Worlds

Some people, despite their topmost efforts, celebrity, or wealth in life, are best remembered for the manner of their death. John Jacob Astor IV is one such man: a millionaire born to a wealthy American dynasty, he graduated Harvard and obtained a rank of colonel in the Spanish-American War to become the richest man to die aboard the Titanic.

Born to the blue-blooded Astor family in 1864, John Jacob inherited the best possible circumstances for the time. He went to the best schools and utilized the skills learned there to increase his wealth through real estate. He built New York's famous Astoria Hotel, which adjoined to the hotel built by and named for his cousin, William Waldorf Astor. With this wealth he indulged his love of invention, patenting a type of bicycle brake, a turbine engine, a pneumatic road improver, and a means of producing gas from peat moss. In 1898 he joined the ranks as a lieutenant colonel in the Spanish-American War, whereupon he fought in Cuba. As a celebrity capitalist, he was no stranger to scandal: Astor divorced his wife of 18 years to marry 18 year old Madeleine Talmadge Force in 1911. Shunned and gossiped about, the pair went on a tour of Europe and Egypt in the company of Molly Brown, herself a nouveau riche outside of the aristocratic cliques of New England society. Madeleine became pregnant on the trip and they were forced to return home aboard the most luxurious ocean liner ever built. Madeleine made it back to New York. John did not.

John Jacob Astor is also notable for having tried his hand at writing a Scientific Romance in the style of Jules Verne, entitled A Journey in Other Worlds: A Romance of the Future. This 1894 novel is a work of retro-futurism, being set in 2088, and exposes Astor's fixation on the issues of his time as only a work charting the future course of humanity can reveal. The first two-thirds wax on history and exploration from the very defined perspective of a millionaire capitalist, and the last third expands into a strange but sympathetic treatise on philosophy, morals and life after death. 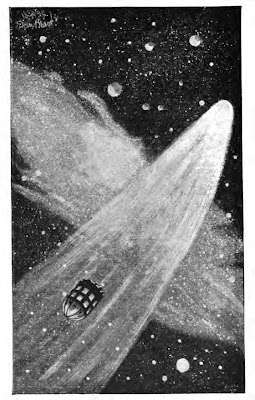