The actual 1890's were not especially gay for the United States. The Panic of 1893, caused by a contraction in foreign commodities trade and subsequent run on US banks to exchange dollars for gold, lead to an economic depression through much of the decade. Stock prices declined, over 500 banks closed, 15,000 businesses did the same, followed by farms and numerous railroads including Union Pacific, Northern Pacific, and the Atchison, Topeka & Santa Fe. Unemployment was as high as 40% in some areas and foreclosed mortgages were a common thing, creating the enduring image of the boarded up, abandoned Victorian mansion. Strikes among the industrial workforce were also increasingly common and the decade ended with the Spanish-American War and the Klondike Gold Rush.

Yet it was also the decade of the 1893 World's Columbian Exhibition and significant technological advancements. Electricity replaced gas lighting, the automobile became more common and more affordable, Ragtime and Vaudeville grew in popularity, and film became a thing. When the children of the 1890's came of age in the post-World War One milieu, they looked back with nostalgia on their younger years (as each generation is given to).

Then along came Richard Vincent Cutler, who began a series of nostalgic cartoons in Charles Dana Gibson's Life Magazine in 1925. In 1927, the cartoons were collected in a single volume titled The Gay Nineties, An Album of Reminiscent Drawings. Cutler is largely credited with having originated the term "Gay Nineties" as a label not for the decade itself but for that fond, nostalgic reminiscence for it. The following are a selection of The Gay Nineties cartoons from the pages of Life. Click on each image for a larger, more legible, version. 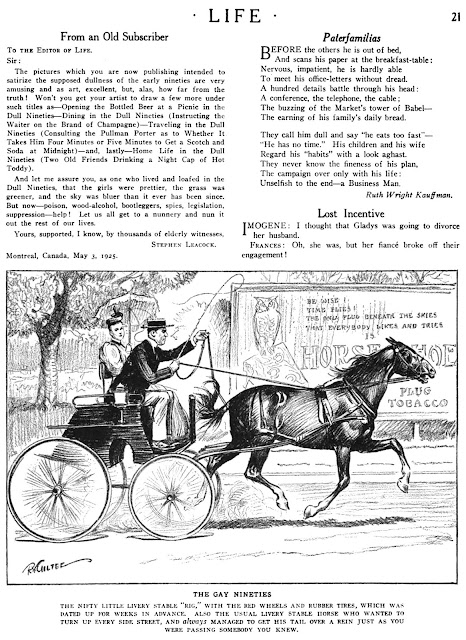