Over a century of film adaptations and countless parodies, including no less than The Simpsons, have inured many to the truly chilling effects of W.W. Jacobs' short story The Monkey's Paw. Originally published in 1902 as part of the anthology The Lady of the Barge, this story of wishes gone awry is exceedingly short yet concentrated in its potency.

The following illustration by E.B. Bird comes from an issue of St. Nicholas Magazine published in 1907 and is entitled Santa in 2007. So that's how he does it these days! Click on the image for a larger version. And Merry Christmas to all! 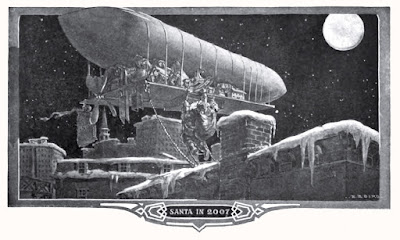 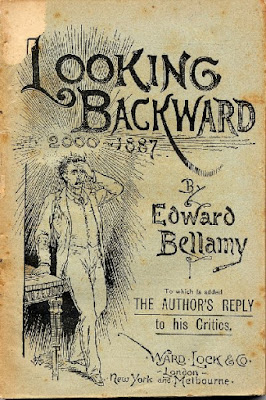 After Uncle Tom's Cabin and Ben-Hur: A Tale of the Christ, journalist Edward Bellamy's speculative novel Looking Backward: 2000-1887 was the third best-selling novel of the 19th century. Published in 1888, this utopian tale created an unheard of sensation in socio-political circles. Marxist writers and labour unions mentioned the book by name as picturing an ideal society. Within ten years, over 165 "Bellamy Clubs" had formed in the United States to propagate the book's ideas, but they were all defunct by the end of the century. Bellamy's utopian vision resonated with a troubled late Victorian society struggling with the transformations of the Industrial Age. Written as a "future history", it provided a hopeful vision that the vexing problems of how to balance industry with humanity had been solved, were solvable. There has been nothing quite like Looking Backward before or since in the annals of Science Fiction writing.

The main issue addressed in Looking Backward is the question of labour. Late Victorian society in the United States was rapidly succumbing to the ills of unregulated industrial capitalism. From 1873 to 1896, the US and Europe dealt with what they then called the "Great Depression" (losing that title to an even greater one in 1929). Known now as the "Long Depression", it was touched off by a financial crisis in 1873 that lead to the bankruptcy of 18,000 businesses, hundreds of banks, and ten US states, as well as the closure of 89 railroads. This depression was exacerbated by further recessions in the 1880's, the consolidation of major industries in monopolies, oligopolies, and trusts, and the development of unionization and growing labour unrest. 1886 saw the Haymarket affair, in which a labour demonstration escalated - through an anarchist agitator throwing a stick of dynamite - into a full-blown riot claiming the lives of four civilians and seven policemen, and injuring scores of others. The cause of labour has essentially been cast aside by the modern "progressive" Left, but it was perhaps the dominant socio-political concern of the late 19th century.