Few Disney live-action films have enjoyed the enduring legacy of 20,000 Leagues Under the Sea. Just as Jules Verne's works entered the public domain, Walt Disney took a gamble on fashioning that novel into his studio's first big-budget, Hollywood-made, live-action film. It was a gamble that paid off beyond anyone's wildest expectations. Walt, director Richard Fleischer, and screenwriter Earl Felton used the backdrop of Verne's original story to meditate on the anxieties of the Atomic Age. They captured the fears and hopes of a generation, and did so on a grand scale, with Cinemascope-sized screen, larger-than-life charismatic actors, beautiful underwater photography, and sheer spectacle. In so doing, Walt Disney helped create a new image of Jules Verne… Verne the icon of optimistic futurism.

20,000 Leagues Under the Sea spawned a whole genre of movies based on Verne's work, including Michael Todd's Around the World in 80 Days (1956), Journey to the Center of the Earth (1959), Ray Harryhausen’s Mysterious Island (1961), and Disney's own In Search of the Castaways (1962). His adventures also translated well into three dimensions. Disneyland opened in 1955 with an exhibit of props from the film, which had originally been slated for the Opera House on Main Street U.S.A., the "opening act" of the park designed to draw guests into a sense of childlike nostalgia. That location would have reinforced 20,000 Leagues presentation of atomic anxiety as an artifact of history. Instead it ended up in Tomorrowland (mostly because of that area's pressing need for cheap attractions) where it still implicitly reinforced the idea of Verne as ultimately belonging to a happy, healthy, hopeful future. Further attractions opened with each new theme park built by the Disney company, most recently as a Tiki bar in Walt Disney World's Polynesian Village Resort.

We come most poignantly in touch with Verne the icon at Disneyland Paris. When designing the park, Imagineers were careful to highlight the connections between French culture and Disney product, no doubt in part to appease France's cultural gatekeepers who were wary of such American "lowbrow" entertainments. The effect conveys an intriguing sense that this is not simply a Disneyland in another language, but that Disney is, in many respects, "coming home" to Europe. Fantasyland has a statue of Cinderella dedicated to Charles Perrault, the Phantom of the Phantom Manor recalls the Phantom of the Opera, and Discoveryland is a version of Tomorrowland based in the Retro-Futurism of Jules Verne. Until 2004, guests could join Verne on a time-travelling adventure in Le Visionarium, soar to the moon in Space Mountain: De la terre à la lune, and investigate the Mysteries of the Nautilus. Discoveryland recreated the colourful atmosphere of an Exposition Universelle like those hosted by Paris in 1889 and 1900, directed by Jules Verne's visionary technological prophecies. Unfortunately Le Visionarium closed in 2004 and Space Mountain was (needlessly) renovated to purge Vernian imagery from its interior in 2005. The Nautilus remains, as does a touching monument to Verne that quotes his famous line: "Tout ce qui est dans la limite du possible doit être et sera accompli"... "All that is within the limits of the possible should be and will be done." 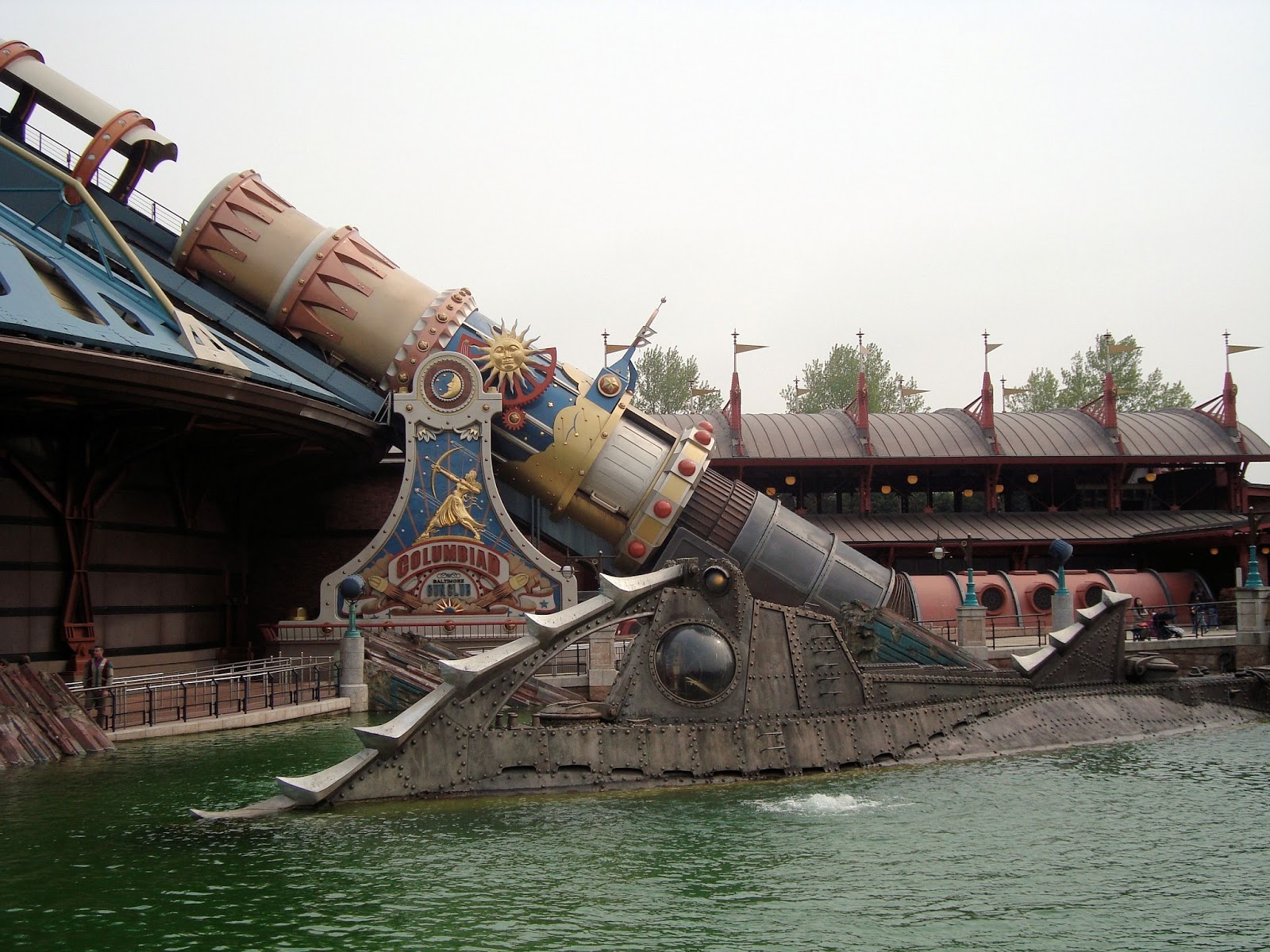 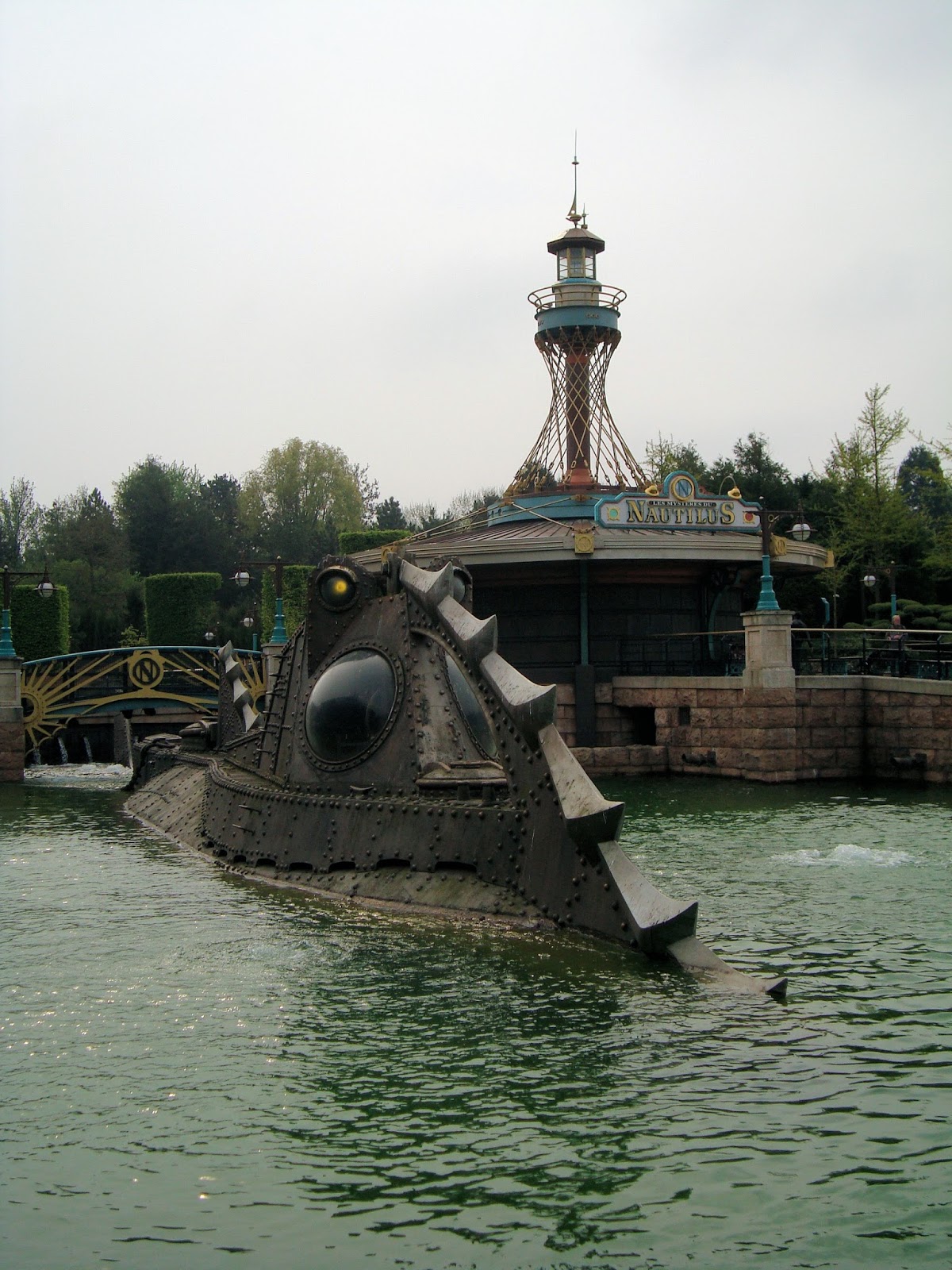 Disney's adaptations of Verne's stories in theme park and celluloid appealed to, and helped create, the author as a symbol of Nineteenth century optimism and futurism. Nevertheless, the Nautilus of the film 20,000 Leagues Under the Sea is a unique creation of Harper Goff's and the Columbiad in Disneyland Paris is far more picturesque than the purely functional cannon described in literature. This visualization is stunningly beautiful, as is the park it is situated in, and it is enjoyable and entertaining in its own right, though one must inevitably be aware that it is a myth constructed over time. Le Visionarium was not based on any one Verne book, but instead the conceit of taking Verne on a trip through time to show how he prophesied the fantastic inventions of the present day. Disneyland Paris distills for us the image of Verne the icon. This Verne is, ultimately, the precursor of Walt Disney's own optimistic futurism exemplified in his original vision for Tomorrowland.

Not far from Disneyland Paris, however, we meet Jules Verne the author, Verne the husband and father and civil servant, and Verne the very mortal man with an immortal imagination and Divine hope. An hour on one of France’s high-speed trains takes you from Paris to the charming city of Amiens, in the Picardie region, a short distance from the shores of the English Channel, where one still finds La Maison de Jules Verne.

Of the photography studios of Paris during  La Belle Époque, perhaps none were more famous than Reutlinger. Started in 1850 by Charles Reutlinger, the studio quickly rose to prominence as photographer to the stars of the theatrical stage. The business passed to Charles' brother Emile in 1880, and from him to his son Léopold in 1890. Under Léopold's initiative, the studio branched out to a brisk and creatively fruitful trade in fanciful postcards blending true photography with interesting backdrops, frames, and effects. Among the most provocative of his subjects were renditions of women among the celestial bodies. The following is a selection of Reutlinger postcards... 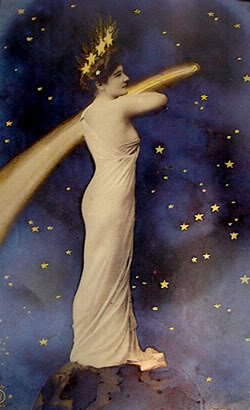