The following vision of New York's "Sky Harbor" in 1950 by Arthur T. Merrick appeared in the November 1907 issue of St. Nicholas Magazine. Click on the image for a larger version. 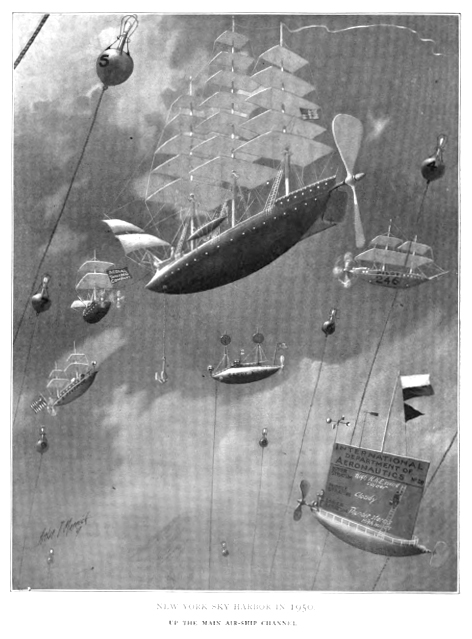 Edgar Rice Burroughs' reputation often precedes the actual reading of his work. Many are familiar with Tarzan, Lord of the Jungle, through its various cinematic incarnations, from Johnny Weissmuller's live-action films during Hollywood's Golden Age to Disney's animated version in the late 1990's. Fewer are as familiar with John Carter than with his impact on the genre of Science Fiction. Franchises like Star Wars and Avatar owe direct debts to Burroughs' Planetary Romance, which came back to bite Disney when they released their own failed film adaptation of the first John Carter novel in 2012. Undaunted, Disney simply bought Star Wars and Avatar. 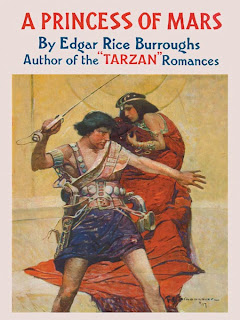 When one does sit down to finally read Burroughs' work, be it Tarzan of the Apes (1912) or The Land That Time Forgot (1918) or At the Earth's Core (1914) or A Princess of Mars (1912), what they find is a very breezy, readable style of pulpy adventure. Time has rendered its judgement on how enjoyable Burroughs' writing and characters are, though it is not without its flaws.
The exploits of John Carter, much like those of Tarzan, begin with an initial trilogy that set-up a lengthy series of novels. A Princess of Mars was the first, delivering our hero to Mars, continued in The Gods of Mars and concluding with The Warlord of Mars, both published in 1913. Burroughs' Barsoom series (so-named for the invented name that Martians give their planet) continue for another ten books, picking up from the heroic John Carter and following the exploits of his son. Read in rapid succession, the Carter trilogy puts the exclamation on Edgar Rice Burroughs' attributes as a manufacturer of pure escapism devolving frequently into outright wish fulfillment.