The following images are by Polish artist and animator Wojciech Ostrycharz, currently of Barcelona, Spain, drafted for an interesting Jules Verne exhibit. His credits include work on Dead Island and the Call of Juarez game franchises, and a cross section of his excellent work can be found at his website  Art Way Studio. The exhibit - The World of Jules Verne - was put together by Branzo Artistic Agency, photos of which can be seen on their website. 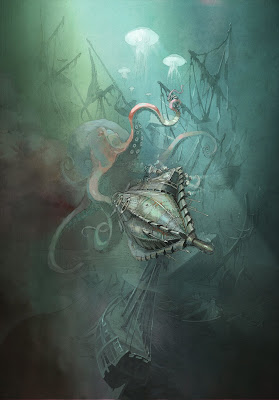 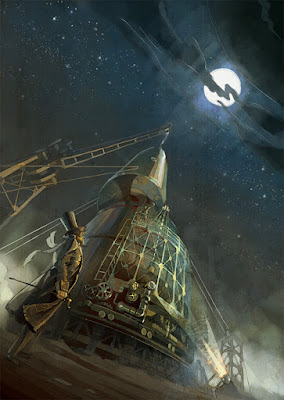 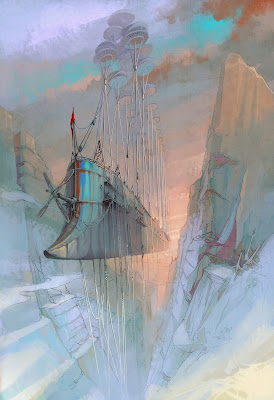 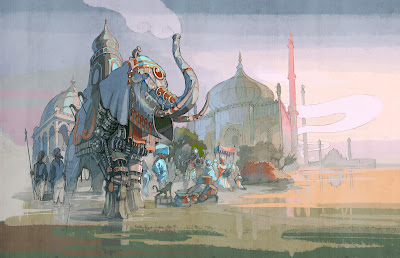 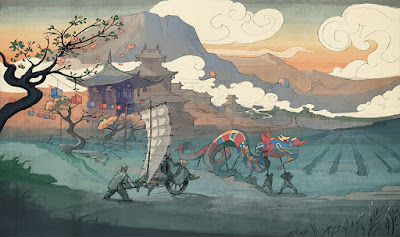 Quite often, both the chief delight and the greatest challenge of Victorian-Edwardian Scientific Romances is the quality of the language. Earnest, effervescent, sometimes overwrought 19th century prose can, in the right hands, not only describe the scene with vivid intensity but convey the mood of overstuffed Victorian formality. In less capable hands they are a mulch of jagged cliches, stilted dialogue, and bizarre Eurocentric racial attitudes. Thankfully George Chetwyn Griffith was a much more accomplished writer than many. Granted, he certainly has his share of melodrama, unrealistic conversations, and objectionable views towards the ethnic characteristics of Martians (as well as clumsy prose: "I wonder if the descendants of the ancestors of the future human race on Saturn will invent anything like a suitable language."). Nevertheless, Griffith's background as a journalist prepared him to deliver his forays into Scientific Romance with the pitch of a Jane Austin novel set in space.

For your consideration, this extended excerpt from the opening chapter of his 1901 novel A Honeymoon in Space, in which "the tall athletic figure and the regular-featured, bronzed, honest English face" of Rollo Lenox Smeaton Aubrey, Earl of Redgrave, Baron Smeaton in the Peerage of England, and Viscount Aubrey in the Peerage of Ireland, appears in his flying machine to whisk Miss Lilla Zaidie Rennick and her chaperone away from a trans-Atlantic steamer on its way to an arranged marriage of economic convenience...


Mrs. Van Stuyler was shaking in every muscle, afflicted by a sort of St. Vitus' dance induced by physical fear and outraged propriety. Quite apart from these, however, she experienced a third sensation which made for a nameless inquietude. She was a woman of the world, well versed in most of its ways, and she fully recognised that that single bound from the bridge-rail of the St. Louis to the other side of the clouds had already carried her and her charge beyond the pale of human law.

The same thought, mingled with other feelings, half of wonder and half of re-awakened tenderness, was just then uppermost in Miss Zaidie's mind. It was quite obvious that the man who could create and control such a marvellous vehicle as this could, morally as well as physically, lift himself beyond the reach of the conventions which civilised society had instituted for its own protection and government.

He could do with them exactly as he pleased. They were utterly at his mercy. He might carry them away to some unexplored spot on one of the continents, or to some unknown island in the midst of the wide Pacific. He might even transport them into the midst of the awful solitudes which surround the Poles. He could give them the choice between doing as he wished, submitting unconditionally to his will, or committing suicide by starvation.

They had not even the option of jumping out, for they did not know how to open the sliding doors; and even if they had done, what feminine nerves could have faced a leap into that awful gulf which lay below them, a two-thousand-foot dive through the clouds into the waters of the wintry Atlantic?

They looked at each other in speechless, dazed amazement. Far away below them on the other side of the clouds the St. Louis was steaming eastward, and with her were going the last hopes of the coronet which was to be the matrimonial equivalent of Miss Zaidie's beauty and Russell Rennick's millions.

They were no longer of the world. Its laws could no longer protect them. Anything might happen, and that anything depended absolutely on the will of the lord and master of the extraordinary vessel which, for the present, was their only world.

"My dearest Zaidie," Mrs. Van Stuyler gasped, when she at length recovered the power of articulate speech, "what an entirely too awful thing this is! Why, it's abduction and nothing less. Indeed it's worse, for he's taken us clean off the earth, and there's no more chance of rescue than if he took us to one of those planets he said he could go to. If I didn't feel a great responsibility for you, dear, I believe I should faint."

By this time Miss Zaidie had recovered a good deal of her usual composure. The excitement of the upward rush, and what was left of the momentary physical fear, had flushed her cheeks and lighted her eyes. Even Mrs. Van Stuyler thought her looking, if possible, more beautiful than she had done under the most favourable of terrestrial circumstances. There was a something else too, which she didn't altogether like to see, a sort of resignation to her fate which, in a young lady situated as she was then, Mrs. Van Stuyler considered to be distinctly improper.

Griffith was most famous in his day for his political novels of future war, such as Angel of the Revolution: A Tale of the Coming Terror (1893) and Olga Romanoff (1894). Pure cosmic explorations were more rare, and he restrained himself from the socialist revolutionary views that he injected more freely into his war books. These views likely limited his appeal in the United States, but perhaps enhanced his appeal in the milieu of public debates between Victorian-Edwardian England's intelligentsia. Between 1893 and 1895 he was considered the most popular English writer of Scientific Romances, until Wells usurped him.

A Honeymoon in Space was originally serialized in Pearson's Magazine as Stories of Other Worlds, before being collected into a single volume in 1901. The change in title is significant. Though still suggesting considerable adventure and wonder, the idea of a honeymoon also implies a certain comfort and familiarity... A domestication of outer space. While his protagonists Lord and Lady Redgrave are exploring uncharted territory, Griffith is not. Based on popular conceptions of cosmology and evolution in his day, Griffith retreads the ground of the celestial spheres as a study in the pathways of human development. 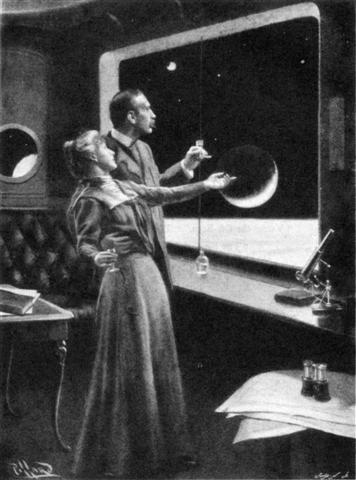