A Message from Mars 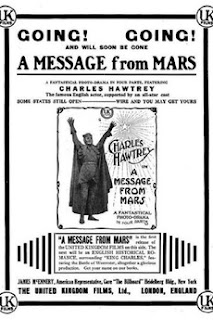 The story of A Message from Mars is a familiar one. A cruel and stingy man, ungenerous and ungrateful, mean-spirited and selfish, finds himself pressed upon a celestial visitor to change his ways and live charitably within the brotherhood of man. It could be from A Christmas Carol, but is in this case an example of how early Scientific Romances on film often took their inspiration from stories of the supernatural and coated them with a superficial veneer of science.

Released in 1913, A Message from Mars is notable as the first feature length British Science Fiction film and Britain's first to feature Martians as a subject matter. These Martians, however, could just as easily be the choirs of Heaven. The story opens on Mars, looking more or less Greco-Egyptian in character, with great columns and Martians adorned with gigantic ankh necklaces. Ramiel, a very angelic-sounding name, has been called before the Martian ruler, dubbed "The God of Mars", for some undisclosed infraction. His punishment is to be stripped of his raiment and cast down to Earth, where he must work to turn the heart of the aforementioned cruel and stingy man to good. He is instantly transported to Earth and exhibits the surprise Martian ability to pass through walls. From above he is watched by the Martians, who gaze upon the Earth with a literal crystal ball.

The film, based on a then-30 year old stage play, is a Scientific Romance in only the loosest possible sense of the term. It is merely the rhetorical replacement of angels with Martians that fixes it thus, and that is a superficial change to anything that the story is about. It doesn't matter that Ramiel is from Mars. The effect on the story - a basic morality tale of redemption - is nonexistent. as for the morality tale, if we accept that the film is only an hour long and a silent film, then it is good enough. It does strain credulity, however, when the man reforms his ways after spending a whole three minutes in the guise of a homeless beggar. Afterwards, though, he does rush into a burning building to rescue a family and then take them into his own home, so I guess it did stick.

Though the first British feature Science Fiction film, the 1913 version of A Message from Mars was not the first version or the last during the silent era. The first was a now-lost 1903 version from New Zealand. MGM released an American remake in 1921. The original play was written by Richard Ganthoney in 1899, and though quite popular at the time has been largely (even completely) forgotten.

A Message from Mars can be watched in its entirety from British ISPs on the BFI Player website. 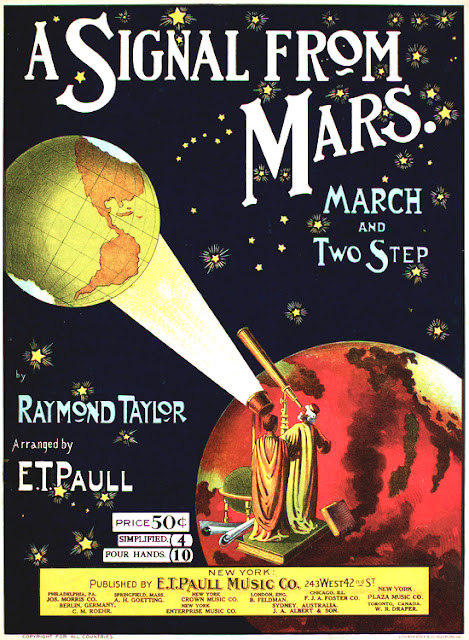