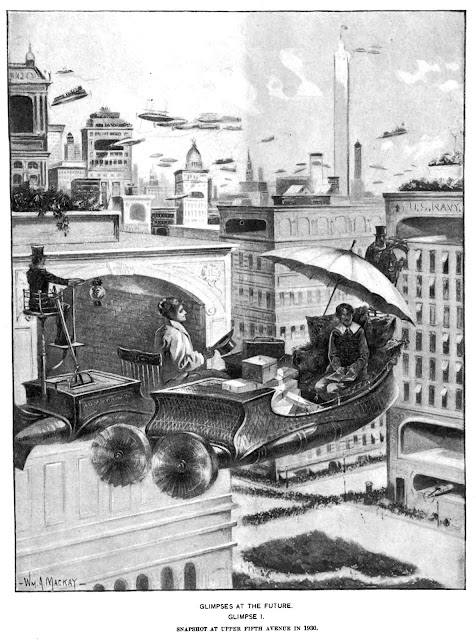 The Tricycle of the Future by Frank R. Stockton

Though little discussed today, save perhaps for one of his most famous fairy tales, Frank R. Stockton (1834-1902) was often compared to his contemporary Mark Twain as a humourist and writer of children's fiction. That most famous work is the ambiguous fairy tale The Lady, or the Tiger? published in The Century Magazine in 1882. In it, the lover of a princess is sentenced by the king to choose between two doors. Behind one is a tiger that will rip him asunder, behind the other is one of the princess' handmaidens whom he would marry. The princess furtively directs him to one of the doors... but the story ends before revealing which one.

Prior to The Lady, or the Tiger?, Stockton served as assistant editor on St. Nicholas Magazine, one of the higher caliber magazines for children available in the later half of the 19th century. There he sharpened his wit in writing not only fairy tales, but also Scientific Romances. He would go on to write for St. Nicholas' parent-magazine The Century and Harper's, eventually producing full novels. Most notable of these is The Great War Syndicate (1889) about a future war between the United States and Great Britain.

The Tricycle of the Future is a delightful short story that exemplifies one of the great joys of Victorian-Edwardian Scientific Romances: how writers of the 19th century arrived at modern technologies through the most abstract, complicated, and absurd ways. In this case, Stockton's boy inventor comes up with the idea for what is essentially an automobile with a six-horsepower engine using six actual horses. But as typical for boy inventors from Darius Green on down, it doesn't quite work out as anticipated.

The following is the complete Tricycle of the Future as it appeared in the May 1885 volume of St. Nicholas Magazine. Click on each page for a larger version. 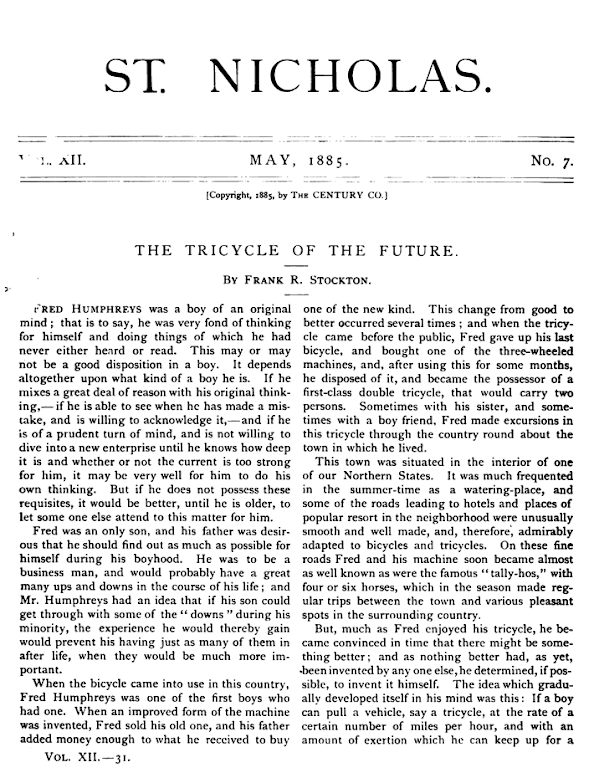