A Tale of Negative Gravity

A Tale of Negative Gravity was written by Frank R. Stockton and debuted in the November 1884 edition of The Century magazine. In it, an inventor cracks the problem of anti-gravity, much to his wife's chagrin. Conspiring to keep it a secret for personal use, it ends becoming quite handy in settling a matter of the heart for the inventor's son. It is presented here as originally published. Click on each page for a larger version. 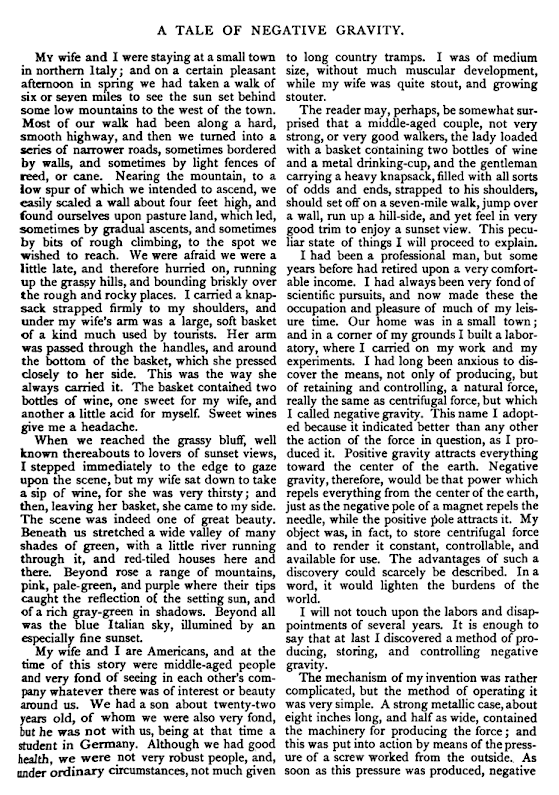 Ward Kimball and the Adventures of Bullwhip Griffin

After a lifetime of cigarette addiction, Walt Disney was diagnosed with terminal lung cancer on November 7, 1966. Doctors gave him only six months to live. He didn't even make it that far: Walt collapsed at home on November 30, was taken to the hospital adjacent to his beloved movie studio, and passed away on December 7. His sudden parting left the studio bearing his name in mourning, but the show had to go on. There was still a full slate of films that Walt had been involved with that were in production and due for release. One of those films, debuting on March 8, 1967, was also one of Disney's most inspired comedies, The Adventures of Bullwhip Griffin.

The Disney studio never drifted far from 19th century historical romanticism, even in the decades since Walt's passing. The "Gay Nineties" was a favourite aesthetic sensibility for the company, returned to again and again through The Nifty Nineties (1941), Casey at Bat (1946), So Dear to My Heart (1949), The Brave Engineer (1950), Crazy Over Daisy (1950), Football Now and Then (1953), Pigs is Pigs (1954), Lady and the Tramp (1955), Pollyanna (1960), and Summer Magic (1963). The very last live-action film on which Walt Disney worked was The Happiest Millionaire, based on true-life philanthropist and eccentric Anthony J. Drexel Biddle, which was released on June 23 of 1967. Disneyland's Main Street USA was a physical manifestation of this fascination, and every Disneyland park around the world since has had a Main Street (or an ersatz version of it) as its opening act.

The Adventures of Bullwhip Griffin pushes the date back a few decades, to the same mid-19th century period as Song of the South (1946) and 20,000 Leagues Under the Sea (1954), but retains that same fascination with the Gilded Age. Specifically, Bullwhip Griffin is set to the California Gold Rush of 1848, and the challenges and opportunities experienced by the sourdoughs who sought fabulous wealth along the Golden State's shining waters.