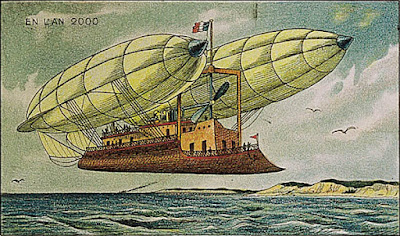 En L'An 2000 (English: In the Year 2000) were a series of cigarette cards produced in France at the turn of 1900. The initial series was released between 1899 and 1901, in conjunction with the 1900 Paris Exposition Universelle, when excitement about the advancements of the coming century were accelerating. A second series was produced in 1910.

For the most part, the series is a fanciful impression of retro-futurism. I don't think many of us have fought off octopi in the last 20 years. There were some astute premeditations of modern technologies that we do take for granted, however, and it is interesting to pick out where the people of the fin de siècle actually did get it right. It's just too bad that we couldn't have kept the elegant fashion they predicted as well!

At least 87 cards were known from the series, produced by a variety of different French artists. Just over half are actually preserved and available for online viewing. Those 55 cards are presented here for your own perusal.

Anime always was weird, even in 1933. I suppose it is worth clarifying that almost all cartoons were weird in the Twenties and Thirties, whether it's Mickey Mouse playing a tune on a cat or Betty Boop fleeing in terror from Cab Calloway rendered as a ghost walrus. By contrast, I suppose Ugokie-Ko-Ri-No-Tatehiki is not that weird. In it, a magical fox disguised as a samurai has a wizard's duel with a family of tanuki - the Japanese "racoon dog" gifted with shape-shifting powers - involving a bevy of traditional Japanese monsters.

The title roughly translates to "Fox and Racoon-Dog Playing Pranks on Each Other" and features two mythologized versions of Japanese wildlife. After a wandering peasant crawls fretfully through a midnight scene worthy of Disney's Skeleton Dance, we are introduced to Kitsune, the Japanese fox. Foxes are indigenous to Japan and have taken on a unique set of folkloric characteristics there. White foxes are considered to be the messengers of Inari, the "kami" (god-like spiritual being) of fertility and harvests. Kyoto's Fushimi-Inari Shrine with its thousands of tori gates lined up in rows – made world famous by Memoirs of a Geisha – is adorned with white foxes. The more tails a fox has, up to nine, the more powerful it is. Amongst its powers are shape-shifting, and foxes are often thought to turn into humans for various purposes good and ill.

In Ugokie-Ko-Ri-No-Tatehiki, the fox turns into a wandering samurai and makes his way to a dilapidated temple. We know something is awry, however, when we see the will-o-wisp Hinotama light up, signifying supernatural activity. Inside the temple, our Kitsune draws the attention of a young Tanuki. Also known as "Racoon-Dogs" in English, Tanuki are a species of wild canine with racoon-like markings found throughout Japan. They are also ascribed special characteristics, foremost of which is shape-shifting and a jovial, playful attitude. You may have seen a statue of one standing in your local sushi restaurant, holding a flask of sake, wearing a straw hat, and flashing his engorged testicles.

Once the Kitsune sits down to enjoy some sake, this curious Tanuki adopts the form of Ichigen-issoku. This one-eyed, one-legged Yokai (monster or supernatural entity) is the ghost of the high priest Jinin of the Mount Hiei Temple in Kyoto, circumnavigating the mountain on midnight strolls. Seeing the ruse, the Kitsune entraps the Tanuki with its love of songs. Bested, the little one calls in the reinforcements. Upon his arrival, the elder Tanuki sneaks up on the Kitsune, in reference to a well-known urban legend. According to an August 1873 illustrated newspaper (Shinbun nishiki-e), a man was woken by the screams of his child, over whom loomed the form of a three-eyed monk. This monk grew larger and larger until it reached the very ceiling of his house. Wise to the trick himself, the father grabbed the monk's sleeve and pulled him down, whereupon the monk transformed back into a Tanuki. What follows is a knock-down, drag-out magic fight between the two shape-shifting pranksters.