The Victorian Invention of Halloween

The common story goes that Halloween originated in the misty days of pre-Roman Ireland, with the year-ending festival of Samhain. That final day of the Celtic calendar was a "thin time" when spirits walked the Earth and costumed junior Druids traveled from home to home with lighted turnips, begging for food. The festival was appropriated by the Catholic Church as All Hallow's Eve as a fair or foul attempt to convert the Pagans, and evolved over time into the holiday we know today.

If only there was any historical evidence for this story!

Very little is actually known about Druids, their festivals, and their practices, on account of their being a pre-literate culture. Most of what we do know comes from the Romans, an imperial force who cannot be relied upon to have a full, nuanced appreciation for the cultures they attempted to conquer. It was the Romans who gave the impression that mass human sacrifice in Wicker Men was a common Druidic practice. After the collapse of the Roman Empire in the West, Celts took to Christianity and took to it hard. So it can safely be said that there was a festival surrounding Samhain, a term which literally means "summer's end" but was not necessarily the end of the Celtic year. It may have had something to do with honouring the dead, but we don't know for sure, and that practice may have been Christianized as All Saints Day, a lesser festival honouring all the saints and martyrs who did not have their own designated feast days (the preceding evening being All Hallows Eve), and followed by All Souls Day remembering all the Christian dead. Yet the original practice of All Saints Day varied from country to country - November 1 in England and Germany, April 20 in Ireland, May 13 in most of the Christian world - and the November 1 date was only fixed in the 12th century, well after the Christianization of the Celts. Scholars can't actually say what transpired during Samhain festivals, on account of there being no record whatsoever. It seems that processions for the faithful dead were actually a Christian invention, as well as the door-to-door begging for food. All Saints was only one such opportunity for such activity: processions and door-to-door hunger appeals also surfaced on the feast days of St. Andrew, St. Nicholas, St. Thomas, and even later on Guy Fawkes Day. Like other holy days, it became an opportunity for ribald fools festivals, danse macabre, and pranking. In Europe and the British Isles, Halloween is only a minor practice, oftentimes unwelcome, and one that has mostly been imported from the United States.

That being the case, where did the idea that Halloween was an ancient, pre-Christian Druidic practice come from? The most likely answer is that it came from the same people who invented the modern holiday of Halloween itself: the Victorians! 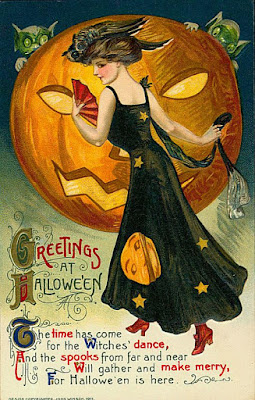 Will Rogers' The Headless Horseman

Long before Johnny Depp or Bing Crosby's voice, the inept schoolmaster of Washington Irving's classic American novel The Legend of Sleepy Hollow was first played by cowboy funnyman Will Rogers in 1922. Rogers was still relatively new to film at the time, but not to entertainment. He was already the toast of Vaudeville for his trick roping and incisive political wit. In 1918 he was signed by Samuel Goldwyn and moved from New York to Hollywood. It was there that he starred in The Headless Horseman. 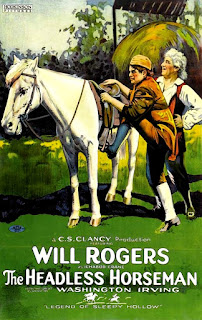 The Headless Horseman stays remarkably true to the book for a feature film. A civilized but superstitious Yankee teacher named Ichabod Crane comes to the little dutch hamlet of Sleepy Hollow. Soon, poor ungainly Crane wishes he was nowhere near this insane town which rests under the dark shadow of a departed Hessian solider who rides on every full moon to claim a head to replace the one he lost lo so many years ago. Suspicious and weary, the townsfolk mistrust Ichabod, and even try him for witchcraft! There is but one respite: the delightful young belle Katrina VanTassel, daughter of the richest man in the county. Unfortunately, being a frivolous girl, she is merely using him to give her true beau, Brom Bones, a bit of competition. Constantly upped by the high-class city-slicker, things come to a head (so to speak) one dark and foreboding Halloween night. Destiny meets up with Ichabod Crane in the form of the Headless Horseman.

Aside from being the first screen adaptation of the Irving story, The Headless Horseman may also perhaps be the silver screen's first horror-comedy. Unfortunately, Will Rogers' comedy was based in the powers of speech, which is a detriment when it comes to silent films. A humble, "aw shucks" demeanour gives it a go with the limited silent-era slapstick, but this trick roper's hands are tied in this medium.

However, one doesn't watch a flick like The Headless Horseman for laughs. The story is, like the novel, primarily about the love triangle between Ichabod Crane, Katrina VanTassel, and Brom Bones. But when the title character rears his decapitated shoulders, the limitations of silent film become tried and true assets. A simple double-exposure was all that was needed to create a scene more bone-chilling than anything Tim Burton's computers could muster.

Nevertheless, any film adaptation of the Legend of Sleepy Hollow must compare with Disney's near-monopoly on it, even if it was made before Bing crooned the audience. Disney's version still benefits from it's short length, providing a tighter story that doesn't waste time getting to the part everyone wants to see. It has another advantage over the 1922 film: part of the fun is the ambiguity over what the Horseman is... Is is a ghost? Or was it Brom Bones? Was Ichabod spirited away, or was he alive and well in New York? Disney never tells. However, this version of the film does, losing some of the mystique in the process.

There is a way to regain some of it though. Save The Headless Horseman for just the right moment... A dreary autumn afternoon in October, dried leaves rustling in the wind, the ever so faint laughter of children being carried on the wind, the hooting of owls and cawing of crows, the smell of decay, the dwindling sunlight, the harvest, the feeling of Halloween... Just the kind of dusk described by Coleridge...

Like one, that on a lonesome road
Doth walk in fear and dread,
And having once turned round walks on,
And turns no more his head;
Because he knows, a frightful fiend
Doth close behind him tread.