Scientific Romances in the Land of the Rising Sun

Japan has a long history of Science Fiction, going far beyond the dystopian epics of Cyberpunk anime. It even goes back further than the immediate post-war period that gave rise to such things as the Kaiju monster movies and Osamu Tezuka's Mighty Atom. It goes all the way back to the worldwide scope of Scientific Romances and stands uniquely in the canon of the genre. 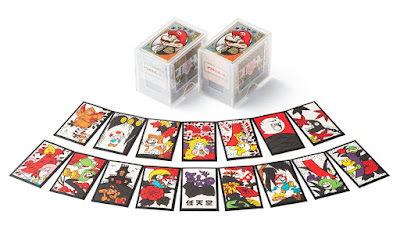 The Bioshock Infinite that Could Have Been

As readers of this weblog may have been able to glean by now, I have a bit of an obsession with Bioshock Infinite. Without reservation I can say that it is one of the finest video games I have ever played, transcending simple enjoyment of gaming itself to engage with a compelling story and setting. It ranks easily within my Top-10 of the whole genre of Retro-Victorian Scientific Romances, maybe even within my Top-5, for how it blends the human drama of guilt and redemption with a neat Sci-Fi premise with social commentary on conservatism and radicalism with an extremely well-researched and well-executed Victorian-Edwardian setting both aesthetically and historically rich.

For as fantastic as it is, Infinite is not flawless. Matt Lees of VideoGamerTV raised a very salient critique about how underused the premise of multiple realities truly is: "Why is it that the only thing Elizabeth ever really pulls in from another universe are gun turrets, and cover, and hooks? In an infinite universe of infinite possibilities, most people just end up building loads of freight hooks." The complexities of translating blue sky ideas into a functioning game can excuse Ken Levine and his team for a great deal. Concept art and early game demos provide us with a glimpse of what, in a parallel universe, could have been an even more ambitious game.

In Bioshock Infinite, the visitor to Columbia would first take note of its religiousity. The Welcome Center is essentially a tremendous baptismal font by which one may wash away the sins of Earth before ascending to the New Eden of this flying city. When the player character Booker DeWitt is nearly drowned in his unwilling full immersion, he regains consciousness in a pleasant garden loomed over by three statues representing the particular religious fervor of Columbia: George Washington, Thomas Jefferson and Benjamin Franklin rendered as holy saints. If only this extravagant fusion of patriotism with religion was invented in the minds of a team of game designers! It is, on the contrary, a logical extension of belief in American Exceptionalism. 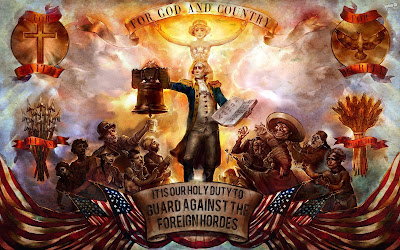 The notion that the United States of America is somehow uniquely blessed in the history of humanity dates at least as far back as the American Revolution, with precedents in Puritan minister John Winthrop encouraging the settlers to build a "City on a Hill" as an example to the world in 1630. Thomas Jefferson defined the Revolution not merely as a conflict over taxation and governmental representation, but as a battle for the "Empire of Liberty" against British imperialism:

...we shall form to the American union a barrier against the dangerous extension of the British Province of Canada and add to the Empire of liberty an extensive and fertile Country thereby converting dangerous Enemies into valuable friends.

He went on to suggest to James Madison, when he took over the Presidency from Jefferson, that the invasion and assimilation of Canada was necessary to the extension of his ideological empire:

...we should then have only to include the North in our confederacy... and we should have such an empire for liberty as she has never surveyed since the creation: and I am persuaded no constitution was ever before so well calculated as ours for extensive empire and self government.

From the outset, the United States of America was viewed as much as a belief system as a country, its cause not merely one of territorial gain but of evangelistic zeal.

It is sometimes joked that the United States has never met a heresy that it didn't like. Constitutional barriers to the establishment of religion and the frontier mentality of American settlement fermented a petri dish of new religious movements throughout the Nineteenth century, many of which translated into would-be utopian communities. These communities were not strictly religious either, with many established on secular political, economic and philosophical ideals. All of them failed in one way or another, whether they fractured from within or could not sustain themselves in conflict with the laws of the nation. Both of these trends are reflected in Bioshock Infinite's flying utopian city of Columbia and its cult-like leader Zachary Hale Comstock. 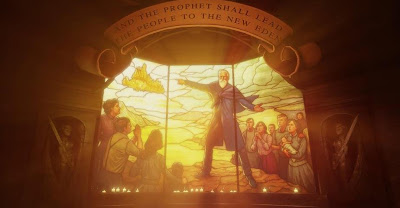 Father Comstock sees a vision of a floating city, a new Eden.

When the Nineteenth century began, Christianity in the United States was in the early stages of what would be called the "Second Great Awakening." This movement was expressly evangelistic, restorationist and personalistic, eschewing the established denominations for forms of religion that emphasized personal conversion, charismatic leaders, heightened emotionalism, and counter-culture radicalism, while dispensing with what they perceived as accumulated traditions, and expressed through ad hoc associations like "cults," camp meetings and tent revivals. Their success can be attributed in many respects to what was later described in Frederick Jackson Turner's "Frontier Thesis": an ethos of individualism and self-reliance that was responsive to the demands of frontier settlement, with a mistrust of the established, systemic authority of governments, aristocracies, the arts, churches and academics (including scientists and formal theologians). The more spread out Americans got, the more they looked for solutions that fit their particular contexts and values. Some might argue that we still see echoes of these tendencies in the American zeitgeist.

At the turn of the previous century, the United States of America was undergoing a veritable cultural crisis at least as serious - if not as violent - as the Civil War. The 1890 census declared that the Western frontier had closed to new settlement, limiting the amount of available farmland and driving ever greater numbers of people into the bursting cities. By 1910, 46% of Americans lived in cities, which challenged the agrarian base that had previous defined America's economic activities. Those Americans, some 42 million people, needed to work, and found that work in factories. Factories, in turn, needed people to buy the goods they produced, creating a new culture of consumerism. However, an economic depression hit in 1893, which itself came after and during a long string of labour strikes starting with the Chicago Haymaker Riot of 1886. Advances in mass transportation allowed the better-off to retreat to the suburbs, leaving the inner cities to struggling, impoverished, working classes stuffed together in dank, diseased tenements. This decay of the city centres just as they were required to meet the needs of ever greater numbers of people created a very real problem in need of creative solutions.

In the game Bishock Infinite, Zachary Comstock suggests simply taking a whole city aloft and letting the Earth sort out its own problems. The design of Columbia, however, falls very much within one of the civic planning solutions proposed at the time in which the game is set: the City Beautiful Movement. 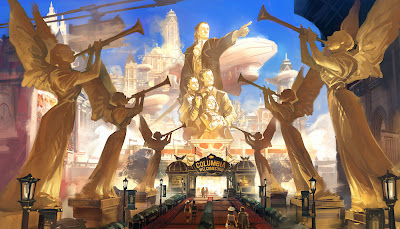 The guiding principle of the City Beautiful Movement was a belief in aesthetics as a moral philosophy. Beautiful environments, they maintained, would inspire civic pride and moral uprightness as citizens strove to live up to the standards of the architecture and city planning surrounding them. Charles Mulford Robinson, a journalist and leader in the movement, outlined the view that "Modern civic art desires for the beauty of towns and cities not for beauty's sake, but for the greater happiness, heath and comfort of the citizens." The chosen style of the movement's advocates was Beaux-Arts, imported from Europe. The Ecole des Beaux-Arts in Paris emphasized the principles of compositional unity and symmetry, the relationship of the elements of a building within itself and to other buildings, and the continuity of history, manifesting most frequently in Greco-Roman Revivalism. Its use would suggest that America had reached a cultural parity with the Old Country, finding a new identity as a world power now that notions of the agrarian frontier were passed. As a Neo-Classical style, Beaux-Arts was also seen to embody characteristics of order, harmony and dignity... All things that they hoped would rub off on the city's airs. In the process, the movement established the de facto official architecture of the United States. 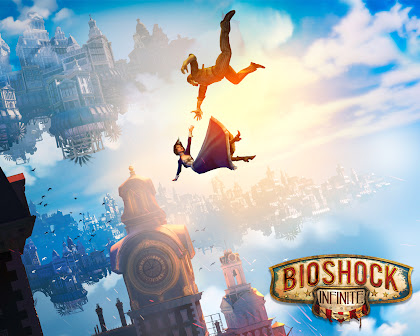 Bioshock Infinite, a 2013 first-person shooter style video game released by designer Irrational Games and publisher 2K, is both a stunning visual feast and a provocative reflection on both the Scientific Romances of the Victorian-Edwardian Era and the modern socio-political climate in the West. The first Bioshock game was heralded as an artistic masterpiece of modern gaming, marrying an astonishing setting with interesting philosophical concept. In the original game's case, it was a critique of Ayn Rand's economic theory in an Art Deco city under the ocean gone to rot... A survival horror set in a submarine Fountainhead, though ostensibly better written, which extended into a meta-reflection on the very nature of video gaming itself. Bioshock Infinite continues this legacy of using video games as a medium to dissect the nightmare of political and economic utopias by way of a Victorian floating city.