The World's Columbian Exposition of 1893

With a decade to go before the dawn of the 20th century and 400 years after Columbus set foot on American shores, the United States was at a crossroads. By 1890, the period of Westward expansion was over: the 1890 US census announced that the last lands of the frontier had been settled. Any farmers looking for new property were forced to head north into Canada, where homesteads were still available until 1914. For the majority of people, cities provided the only means for a living. American society began the shift from agrarianism to urbanization, with all the associated ills. Advances in mass transportation allowed the better off to retreat to the suburbs on the cusp of city borders, leaving the inner cities in squalor... A process reaching its apotheosis after the Second World War. At the same time, an economic depression struck in 1893 when railway companies shuttered due to over-servicing of the market, taking investment banks down with them and rippling throughout the economy. Nevertheless, immigrants continued to arrive in droves, to the tune of 13 million over the course of the decade.

In 1893, Frederick Jackson Turner presented his landmark "Frontier Thesis," outlining the theory that the American collective psyche was shaped and identified with the concept of the Western frontier. Turner argued that the process of expansion into new territories with their own natural and societal challenges required nascent Americans to abandon non-functional European institutions, including its aristocracies, churches, forms of government and hereditary entitlements. The movement West encouraged an ethos of individualism, self-reliance, and republican democracy, with consequent mistrust of the systemic authority of government and science, as well as an antipathy towards art and a commitment to the use of violence to resolve conflict. Americans found greater utility in ad hoc measures suited to the immediate environment, from vigilance committees to new religious movements. Until the admission of Utah as a State in 1896, the US government had been waging a protracted political struggle with the Mormon church, which had effectively established theocratic rule in the territory. It's been said that the United States has never seen a heresy it didn't like, and the frontier environment was ripe for the formation of groups like the Mormons, Jehovah's Witnesses, Christian Science, Southern Baptists and Pentecostals.

The closing of the frontier marked a major collective psychological crisis in America. One response was to retreat into a newly fashioned mythology about the settlement period: the invention of the "Wild West." Buffalo Bill Cody debuted his first "Wild West" show in 1883, the first cinematic Western - The Great Train Robbery - premiered in 1902, and in 1897, Charlie Russell moved off the ranch and into the artist's studio to chronicle the passing era. Another response was to engage in overseas expansion. 1893 also marked the year that American dissidents overthrew the Kingdom of Hawaii and began the process to usher it into US governance in 1898. The end of the Spanish-American War in 1898 brought two new spheres of influence under the eagle's wing: the Caribbean (Cuba, Puerto Rico) and the Philippines (Guam, Philippine Islands). The latter lead to a war between American troops and Filipino freedom fighters that ended with the Philippines becoming an unincorporated American territory in 1902.

With a full-up nation and overseas aspirations, the United States came of age. No longer a frontier to be settled, many turned their attention to the question of what America was going to become and its readiness to ascend to the same echelon as the great European powers. That the 400th anniversary of Columbus' landing should coincide with America's social and psychological upheaval was providential for the organizers of the 1893 World's Exposition in Chicago. The committee was eager to apply the medium of the world's fair to the assertion of America's emergence into national maturity (or adolescence), creating a gleaming white beacon of American optimism and exceptionalism on the shores of Lake Michigan. 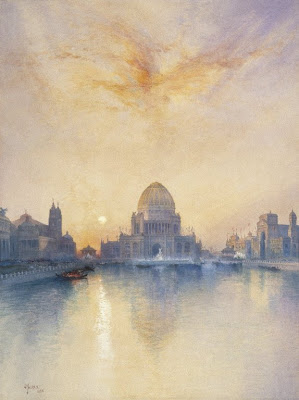 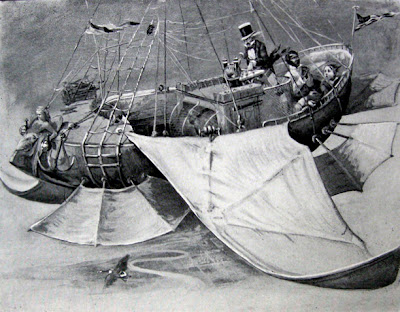