The character of Peter Pan was first developed by J.M. Barrie in his 1902 adult novel The Little White Bird. In this semi-autobiographical tale, the narrator tells his young ward David about a week-old infant named Peter who overhears his parents discussing their future hopes for his adult life. This all sounds rather dreadful to him, so Peter absconds to Kensington Gardens where he encounters the various fairy folk who make this London park their home. These few chapters in The Little White Bird inspired Barrie to write a full theatrical play entitled Peter Pan; or, the Boy Who Wouldn’t Grow Up in 1904. The chapters in Little White Bird were slightly rewritten and published as the book Peter Pan in Kensington Gardens in 1906.

Though published to capitalize on the success of the play, Peter Pan in Kensington Gardens is not a prequel to Peter Pan. Rather, it is a first draft of sorts. Barrie would revisit many of the themes and situations in that short story, not the least of which being the flying boy who refuses to grow up. Kensington Gardens would become Neverland, though Peter does allude to having spent some time in the Gardens when he first decided not to age. Maimie, the girl who develops an affection for Peter, becomes Wendy. Finally, in 1911, Barrie rewrote his play as a novel. Peter and Wendy became the definitive literary version of the story that has inspired countless adaptations on stage and screen since. 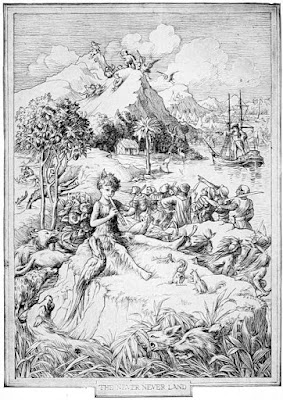 The Magic of Disneyland's Background Music

The creation of background music for a theme park is a fine art unto itself. Most visitors to one of Disney's worldwide theme parks tend to fixate firstly, and most enduringly, on the rides themselves. This may be followed most closely by the visual dynamics of the parks, placing the most emphasis on the work of Imagineers and set designers. Yet Disney's parks famously (or infamously) strive to affect all the senses. It is a poorly kept secret that scents are pumped through vents throughout Disneyland to accent the areas guests pass through. The enticing aromas of candy-making, for example, do not derive from within the candy shoppes on Main Street USA, but from hidden vents across the storefronts.


Music is another important aspect of themed design. Of course, Disney's relationship with music is longstanding: it was the innovation of synchronized sound with the animated cartoon that propelled Mickey Mouse and his creators into stardom, and it would be impossible to imagine a Disney film without its Academy Award winning songs. The same holds true of the rides in the world's various Disney parks, and not just the rides. Streetscapes and area music requires just the right playlist to immerse guests into the places and times they are meant to represent. Theme parks are not designed to merely replicate reality, but to craft an environment of heightened reality. Main Street USA does not mimic an actual turn of the century American community, but the romantic ideal of the Gay Nineties owing most to cinematic representations. Like cinema, Main Street USA needs a soundtrack.

The following are some choice background music loops from Disneyland and other Disney parks that are invaluable for aficionados of Victorian and Edwardian music. Each is carefully compiled, often by legends like Jack Wagner, to evoke the romantic ideal of the time period. Sometimes that means straying from actual period pieces to choice excerpts from Hollywood and Broadway, not to mention medleys of Disney's own tunes. Nevertheless, they are perfect background music for Scientific Romances in a bygone age. These links carry you to YouTube, which is an invaluable resources for Disney park music. The Google-savvy individual should have no problem finding means of making mp3 copies, if they are so inclined.
Another two tracks have appeared on Soundcloud: the 1976-1991 morning and evening background music for Walt Disney World's Main Street USA.