Despite the 1841 patent, which was taken out with the British patent office on January 4th as an "Apparatus for obtaining motive power" (patent #8771), Charles Golightly first surfaces in the late 1820's as a character in satirical cartoons. 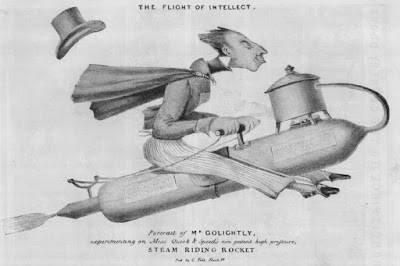 Titled "THE FLIGHT OF INTELLECT", the caption of the image reads "Portrait of Mr. GOLIGHTLY, Experimenting on Mess Quick & Speed's new patent high pressure STEAM RIDING ROCKET"... A fairly clear indication that this absurd but evocative contraption is meant to poke fun.

One of the likely targets is Robert Stephenson, whose locomotive dubbed "The Rocket" debuted in 1829. Robert and his brother George had been experimenting with steam locomotives for several years, including the "Locomotion No. 1" in 1825 and "Lancashire Witch" in 1828. Experiments in locomotion quickly became an object of fear and ridicule, in spite of the meteoric popularity of train travel. Not even the accidental death of a Member of Parliament on the opening day of England's first passenger steam railway, the Liverpool and Manchester Railway, could deter travelers.

A popular journey for Charles Golightly was the California Gold Rush. Over 300,000 treasure hunters fled to California in 1849 in search of the elusive metal. Most made the journey by wagon or sail, but newspaper cartoonists thought of more inventive options to parody the mania for gold that had overtaken society.

Sadly, it would seem that Golightly is a cartoonists' creation. Nevertheless, he stands as a charming icon of the time and Victorian folly.
Presented by Cory Gross