The inspiration for The Secret Agent, originally published in 1907, came from an actual incident where a failed terrorist accidentally blew themselves up before reaching their target at Greenwich. Conrad recalled that it was "a blood-stained inanity of so fatuous a kind that it was impossible to fathom its origin by any reasonable or even unreasonable process of thought. For perverse unreason has its own logical processes. But that outrage could not be laid hold of mentally in any sort of way, so that one remained faced by the fact of a man blown to bits for nothing even most remotely resembling an idea, anarchistic or other." How easily that could be applied to the present political climate in Europe and the United States... Solitary radicalized Muslims thinking that they are striking a blow against the West by shooting up nightclubs, shrieking students excreting menstrual blood on a sheet to protest the Patriarchy, the entirety of this past American presidential election... The increasingly voluminous examples of sometimes violent political action without rhyme, reason, goal, or purpose except to express disingenuous rage.

Conrad furnishes the best explanation he can think of. From the novel, when the ambassador instructs Verloc...

A bomb outrage to have any influence on public opinion now must go beyond the intention of vengeance or terrorism.  It must be purely destructive.  It must be that, and only that, beyond the faintest suspicion of any other object.  You anarchists should make it clear that you are perfectly determined to make a clean sweep of the whole social creation.  But how to get that appallingly absurd notion into the heads of the middle classes so that there should be no mistake?  That’s the question.  By directing your blows at something outside the ordinary passions of humanity is the answer.  Of course, there is art.  A bomb in the National Gallery would make some noise.  But it would not be serious enough.  Art has never been their fetish.  It’s like breaking a few back windows in a man’s house; whereas, if you want to make him really sit up, you must try at least to raise the roof.  There would be some screaming of course, but from whom?  Artists—art critics and such like—people of no account.  Nobody minds what they say.  But there is learning—science.  Any imbecile that has got an income believes in that.  He does not know why, but he believes it matters somehow.  It is the sacrosanct fetish.  All the damned professors are radicals at heart.  Let them know that their great panjandrum has got to go too, to make room for the Future of the Proletariat... They believe that in some mysterious way science is at the source of their material prosperity.  They do.  And the absurd ferocity of such a demonstration will affect them more profoundly than the mangling of a whole street—or theatre—full of their own kind.  To that last they can always say: ‘Oh! it’s mere class hate.’  But what is one to say to an act of destructive ferocity so absurd as to be incomprehensible, inexplicable, almost unthinkable; in fact, mad?  Madness alone is truly terrifying, inasmuch as you cannot placate it either by threats, persuasion, or bribes... What do you think of having a go at astronomy?

It echoes, in certain ways, the recent controversy over "Fallism" and the idea that "science" is a tool of Western oppression that must be expunged and purified, or the perennial debates about "trigger warnings" and "safe spaces" on college campuses... Ideological attacks on learning itself. Likewise the tenor of attacks on nightclubs, concerts, and the like have changed. It's no longer a class conflict, as Conrad's character asserts and progressives often insist, but attacks on Western culture and values itself. Murdering hundreds in a concert hall has no direct political purpose and redresses no historical or economic grievance. After the attack on Orlando's Pulse nightclub, Al Qaeda issued a statement advising lone-acting terrorists not to target gay people and other minorities, because Americans would mistake it for the mere homophobia or racism they're accustomed to and not the intended fundamental attack on Western culture.

The Secret Agent examines that thin line where the ineffectual kvetching of "champagne socialists" festers and mutates into violent radicalism, and how that violent radicalism can in turn be used by political elites to further their own ends. When college students demand censorship in the name of justice, who stands to benefit the most? The GamerGate controversy saw the entrenched elites of video game journalism shroud themselves in the rhetoric of social justice to publicly shame and silence gamers from holding them accountable to ethical breaches. Or when a climate change denier exhorts others to "follow the money", how do they not notice that it ends up back at the wealthy fossil fuel corporations who benefit most from climate change inaction?

The three episodes of the series steer away from thinking about these issues in broad political strokes. Rather, it focuses a hard eye on the human toll it takes. Radicalism, fermented as a tool for the elites, ultimately destroys human minds, hearts, and families. In Conrad's world, there is little to redeem it and no escape whatsoever. The narrative grinds inexorably onwards (the novel actually jumps between the planning and the aftermath of the terror attack, allowing the reader to piece together the event by the slow unwinding of its consequences). From the moment that Verloc is assigned to blow up the Observatory, the plot marches forward to a grisly, ugly, awful end.

As bleak and relentlessly, systematically heartbreaking as The Secret Agent is, the very act of examining the human costs is itself a revolutionary act. Basic empathy, understanding, and humanity is increasingly absent from modern discourses of identity politics, where individual dignity is subsumed beneath visible racial and sexual group associations. We're increasingly, frighteningly, opting the easier and more destructive route of seeing each other as mere avatars for a system or a culture or a gender or an orientation... As representatives rather than as actual people. The Secret Agent reminds by negative example of the ultimate end of our mutual dehumanization in the name of ideology. 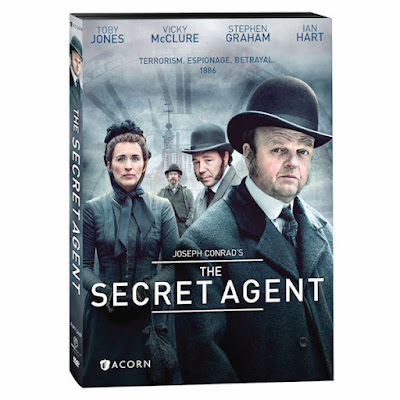 The Secret Agent is available for pre-order from Acorn Online, who were kind enough to send a copy for review.
Presented by Cory Gross