Since the Marvel Cinematic Universe became a billion dollar franchise, there have been many attempts at replicating its success with every available intellectual property lying around. Marvel did not invent the concept of an interlinked series of films and television shows, however. Between 1923 and 1959, Universal Studios produced 72 horror films that eventually wove together in the ongoing battles between Dracula, the Wolfman, and the Frankenstein Monster. Toho Studios in the 50's, 60's, and 70's eventually linked all of their giant monster movies together into a single "Showa Era" continuity headlined by Godzilla. Another studio to try their hand was Rankin/Bass, who produced the preeminent series of holiday specials beginning with 1964's Rudolph the Red-Nosed Reindeer. 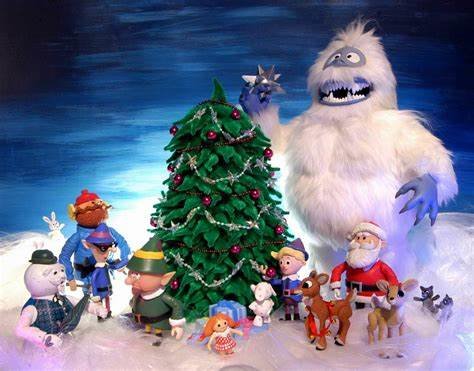 That holiday classic set the tone and tropes of Rankin/Bass' output for decades to follow. It opens with a celebrity narrator - folk singer Burl Ives as Sam the Snowman - presenting our story as an extended flashback. That story takes a still-new Christmas song, mixes it with well-known holiday iconography including the ubiquitous Victorian Christmas aesthetic, and spices it with some pretty wildly idiosyncratic characters. Rudolph is born to Donner, but suffers mockery for his physiological non-conformity. After finally being denied participation in the reindeer games, he meets up with Hermey, an elf on the lam. Hermey has ambitions to be a dentist, which goes unappreciated in Santa's workshop. They meet up with a prospector named Yukon Cornelius, and eventually make their way to the Island of Misfit Toys, ruled over by a griffin named King Moonracer. However, their steps are constantly dogged by the Abominable Snow Monster (or "Bumble" for short). Eventually Rudolph must confront both the Bumble and his childhood trauma in order to save his friends and Christmas.
The complete Rudolph the Red-Nosed Reindeer.
The vast majority of it makes no rational sense, but it is a lot of fun. Why an elf who wants to be a dentist? Why a griffin? Who cares? Burl Ives regales us with his classics "Rudolph the Red-Nosed Reindeer," "Silver and Gold," and "A Holly Jolly Christmas." There's also some snappy humour in it, including my favourite joke in any TV show: "This fog is as thick as peanut butter!" "Don't you mean pea soup?" "YOU EAT WHAT YOU LIKE AND I'LL EAT WHAT I LIKE!" It proved to be a huge success that has aired on television every Christmas since. And that success inspired more holiday specials to come.
Rankin/Bass was also in the business of traditional 2-dimensional animation, most notably Tales of the Wizard of Oz (1961) and The King Kong Show (1966-69). In stop-motion they had been producing The New Adventures of Pinocchio (1960-61), The Ballad of Smokey the Bear TV special (1966), and the feature films Willy McBean and His Magic Machine (1965) and The Daydreamer (1966), based on the works of Hans Christian Andersen. Their third and final stop-motion feature film was Mad Monster Party? (1967), as weirdly groovy attempt to capitalize on the renewed interest in monster kitsch.
The complete Willy McBean and His Magic Machine.
The Little Mermaid's song from The Daydreamer.