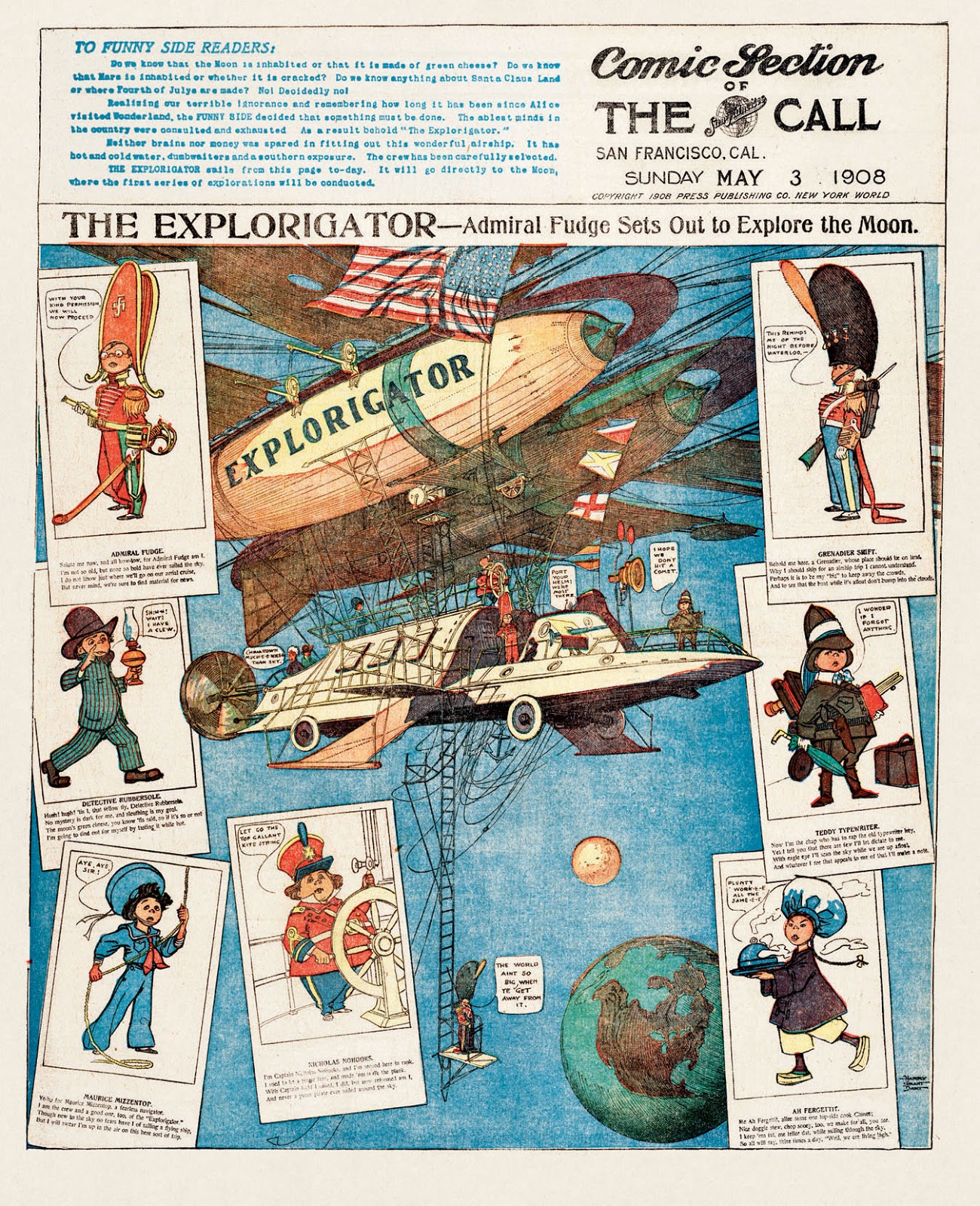 Whereas McCay's Little Nemo found himself in all manner of fanciful places through his dreams, Dart's crew had a more pragmatic approach: the titular flying machine. Via this contraption, the crew was prepared to answer untold mysteries that haunted the minds of humanity. According to the blurb introducing the first strip:

Realizing our terrible ignorance and remembering how long it has been since Alice visited Wonderland, the FUNNY SIDE decided that something must be done. The ablest minds in the country were consulted and exhausted. As a result behold "The Explorigator."

Neither brains nor money were spared in fitting out this wonderful airship. It has hot and cold water, dumbwaiters and a southern exposure. The crew has been carefully selected.

THE EXPLORIGATOR sails from this page to-day. It will go directly to the Moon, where the first series of explorations will be conducted.

That crew is a colourful cross-section of character archetypes (and racial stereotypes) common to this golden age of newspaper comic strips. There is the plucky reporter Teddy Typewriter and Chinese cook Ah Fergetit, the British guard Grenadier Shift and the sleuth Detective Rubbersole, navigator Maurice Mizzentop, Captain Nicholas Nohooks, and Admiral Fudge himself, rocking a fine pre-Nazi swastika charm on his hat.

Their first and only stop was the Moon. Like other stories of the type, the lunar sphere investigated by the Explorigator is a canvas for fanastic architecture and terrible puns, with incidents practically out of Lewis Carroll. After the Grenadier is caught trying to steal a product of the Moonbeam Factory, his hat (who was the real culprit, since the pilfered moonbeam was hiding beneath it) was confiscated and rehatched, whereupon it sprouts wings and a beak. The chase for the hat lands them in the palace of the Lady in the Moon, whose ladies in waiting are captivated by the Chinese cook, which causes the jealous Admiral to fire him. They then end up in a cave of giant cats and are pursued by giant frogs up to the strip's abrupt ending.

Unfortunately, after a mere 14 delightful and offbeat installments, the strip ended. The Explorigator  can be read in black and white at Barnacle Press, but if you'd like the full colour edition, you will have to look to Forgotten Fantasy: Sunday Comics 1900-1915 from Sunday Press Books.
Presented by Cory Gross