The Perils of Pauline and the First Female Action Stars 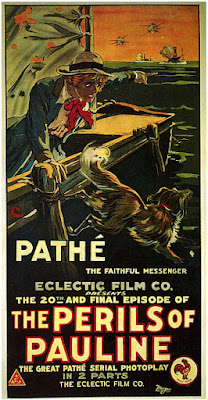 In December 2022, movie star Jennifer Lawrence came under fire on social media after a Variety interview in which she recollected her pride at being the first ever female action star. “I remember when I was doing Hunger Games," Lawrence said, "nobody had ever put a woman in the lead of an action movie because it wouldn’t work — were told — girls and boys can both identify with a male lead, but boys cannot identify with a female lead."
Volunteer fact-checkers were quick to reply with names like Sigourney Weaver, Linda Hamilton, Michelle Yeoh, Pam Grier, Angelina Jolie, Milla Jovovich, Kate Beckinsale, Carrie-Anne Moss, and Uma Thurman. But one name that seems to escape even the most vehement critic of modern activists' urge to throw all past progress under the bus was Pearl White. It was Pearl White who dazzled audiences in 1914 with The Perils of Pauline, a 20-part serial that wowed audiences with stunts and daring. It also  introduced such words as "cliffhanger" to the English language and invented tropes that had become such staples of cinema that they had already become antiquated cliches before Jennifer Lawrence's mother was even born. About the only trope that didn't come from Perils of Pauline was tying women to train tracks... That was in The Hazards of Helen, an imitator that began later in 1914 and ran for 117 episodes.
The Perils of Pauline was not the first cliffhanger serial, or even the first to star a woman. The year before, the Selig Polyscope Company released The Adventures of Kathlyn, a now lost 13-part series. Only a few clips, likely from the first reel, are known to exist. The cast was reunited in 1916 for a feature length version that is also lost. Kathlyn Williams was the star of both.
Extant clips of The Adventures of Kathlyn.
Even Kathlyn Williams was preceded in 1912 by Mary Fuller in What Happened to Mary, an Edison 12-part serial that was too early to employ the cliffhanger format. A cliffhanger, of course, breaks up the main action set pieces of a serial so that the audience is left in breathless anticipation of what happens next, and dutifully ensure they pay to see the next installment. What Happened to Mary didn't have cliffhangers, but it did coincide with a literary serial in the pages of The Ladies' World magazine. Presently, What Happened to Mary is a rare film, with only a couple episodes available online.
Extant episodes of What Happened to Mary.
Despite the pedigree of daring women preceding her, Pearl White and The Perils of Pauline became the smash hit that was remembered and satirized for generations thereafter. In it, grand old Sanford Marvin would like nothing more than to see the marriage of his son Harry to his ward, Pauline. Pauline, however, would like nothing more than to travel the world and lead a life of adventure. So a deal is struck that she will marry Harry after being able to live her life of adventure for one year... And this deal was struck not a moment too soon. Sanford passes from illness immediately thereafter, leaving Pauline in the care his his assistant Raymond Owen (or "Koerner" in the French release), along with a princely inheritance to be bequeathed to her on her marriage to Harry. But such fabulous wealth would be wasted on the girl... Owen enlists his network of criminal colleagues to ensure that Pauline never returns from her adventures. 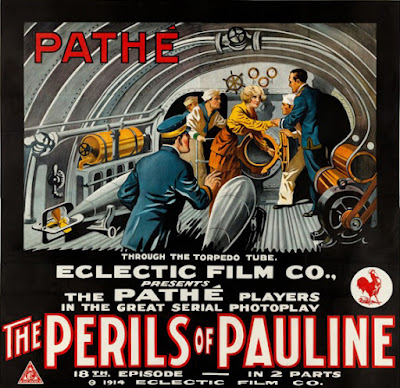 This is the perfect setting for inventive ways to try and kill someone on screen. The first episode has Owen convince Pauline to begin her life of adventure with a ride in a balloon, which he orchestrates to fly off with her by herself. She gets hung up on the Palisade cliffs of New Jersey, and rappels down to a perilous ledge. Harry finally catches up and climbs down a rope to get her... Only to have Owen cut the rope! Fiend! When they manage to deflate the balloon and use its remaining rope to climb the rest of the way down, an accident knocks them out and Pauline is kidnapped by Owen's henchman, who locks her in a burning cabin! Zounds! Subsequent adventures take place in the Wild West, the High Seas, aero races, gypsy camps, and to the bottom of the ocean.
Unfortunately, more of The Perils of Pauline are lost than remain. Of the original 20 episodes, only 9 are known to exist. These are the Pathé version, in which Owen is renamed Koerner to curry anti-German sentiment in the months before The Great War. These episodes have since been retranslated back into English.
The first episode of The Perils of Pauline,
followed by each subsequent, extant episode.


Pauline eventually settles down from a life of adventure, but Pearl White did not. She would go on to star in a series of three serials across 1914 and 1915: The Exploits of Elaine, The New Exploits of Elaine, and The Romance of Elaine. These an subsequent serials like The Iron Claw (1916), Pearl of the Army (1916), and The Fatal Ring (1918) established White as "The Queen of the Serials." She was even notable for doing her own stunts, though she did have stand-ins for the most dangerous among them. That didn't save her from injury, however. Spinal damage during The Perils of Pauline dogged her entire life, and she only found relief for it in the drugs and alcohol that eventually claimed her. White died of liver failure in Paris in 1938.
She did live long enough to see a remake-in-name-only of The Perils of Pauline. Universal Studios acquired title from Pathé for their own serial in 1933 that bore no resemblance to the original. This version, starring Evalyn Knapp, involves more globe-trotting archaeology in the Golden Age of Hollywood adventure film tradition. Weird decades-later remakes that have virtually nothing in common with the original are not a new phenomenon.
The complete 1933 Perils of Pauline.

Then in 1947, Paramount released their own Perils of Pauline. But this version was not a remake... It was a biographical film about Pearl White herself and her rise to fame, cashing in on the Gay Nineties aesthetic that was starting to permeate post-WWII film.
1947's The Perils of Pauline.
Perils of Pauline also inspired countless parodies, homages, and imitators. "The Peril of..." became an easy go-to title for studios pitching dangerous adventure in any locale. The medium of serials and the genre of Northerns were lampooned in Dudley Do-Right of the Mounties. The Perils of Penelope Pitstop (1970) by Hannah-Barbera took the serial tropes and applied to a spin-off of Wacky Races (1968-69), which was itself inspired by The Great Race (1965), Blake Edwards' somewhat overlong and insensitive satire of silent films.

It's frankly surprising in our glut of streaming content that some enterprising conglomerate hasn't dredged up The Perils of Pauline for a tongue-in-cheek historical comedy. Maybe Jennifer Lawrence can star in that and be the first ever woman to play Pauline?
Presented by Cory Gross