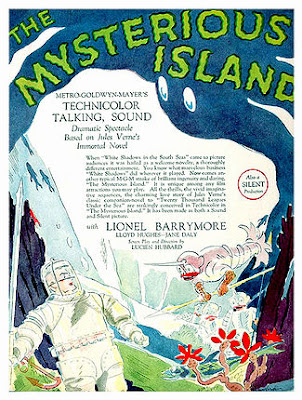 At the end of what is unarguably his most famous novel, Jules Verne sent his tortured mariner Captain Nemo to an apparent death in a mighty maelstrom. The tempest echoed the tempest in Nemo's own soul, but it left behind the question of what might have happened to him after that. Did he survive? How? And what was his story? Why did this mad genius declare war on war, and who was he that he could afford so extravagant a machine of vengeance as the Nautilus?

The answer came a few years later in The Mysterious Island. The story begins much like the Robinson Crusoe type of story does, with a group of Union soldiers and their Confederate prisoner who escaped from a Confederate POW camp via aerostat, only to be blown out to the Pacific and washed ashore on the titular volcanic spit of land, south of French Polynesia and East of New Zealand. While enjoying their tropical getaway, an anonymous observer constantly supplies the Crusoes with the necessaries of survival. Eventually this benefactor is revealed to be Captain Nemo, who survived the maelstrom and has lived out his remaining years in a secret lair beneath the island.

The novel's first adaptation to film came in 1916's 20,000 Leagues Under the Sea. Though under the title of its predecessor novel, this film fused the two together. The sequences from Twenty-Thousand Leagues Under the Sea imparted some good action scenes and made use of the still-new technique of underwater photography. The sequences from The Mysterious Island provided the dramatic gravitas. After The Great War, the works of Jules Verne unfortunately fell into some disrepute.

Verne had always suffered from poor English translations that excised much of his literary and dramatic achievement in favour of two-fisted adventure and technological innovation that would be most appealing to children. By the end of WWI, most of Verne's predictions came true and his work gathered the reputation of simply being outdated... The simple artifacts of grandfather's simpler times. That reputation, despite being consistently overturned in academia since the Sixties and Seventies, still holds a lot of sway, as when Science Fiction author Robert J. Sawyer accused Verne languishing in obscurity because "nothing is less interesting than old technology" (supposedly).

Consequently, the majority of Verne's books to be adapted to film between the two World Wars were his spy thrillers. The most popular of these was Michael Strogoff: The Courier of the Czar, adapted no less than six times between 1914 and 1943. Luckily for Verne, his body of work was diverse enough to lend itself to non-Science Fiction films. Only 20 of his 84 novels and short stories involved any kind of technological speculation. Verne supplied a wanting, literate public with pedagogical adventure in the far-flung locales of the world, whether the wastes of Siberia or the deeps of the ocean.

There is one outlier to this tendency towards adapting the French author's spy novels: The Mysterious Island, released by MGM in 1929. Whereas Verne was not an author of Science Fiction as we think of it, that genre was becoming established by the late Twenties. There is no bigger example than Fritz Lang's masterpiece Metropolis, released in 1927. He followed that up in 1929 with Frau im Mond ("Woman in the Moon"). Tolstoy's 1923 Science Fiction novel Aelita, or the Decline of Mars was adapted in 1924. More poignantly, Sir Arthur Conan Doyle's 1912 dinosaur adventure story The Lost World was adapted to film in 1925. There was a distinct possibility that Verne could be rehabilitated as a source for Sci-Fi stories in the age of Art Deco and Radium.

Fitting it into that genre was another feat which renders the use of Verne's title somewhat moot. In this version, Count Andre Dakkar (played by Lionel Barrymore) has created a fleet of two submersible craft to explore the depths of the ocean, where he is sure there exists a form of aquatic man. His volcanic island off the coast of the fictional Eastern European nation of Hetvia is a worker's paradise without class distinctions... So much so that Dakkar's sister, Countess Sonia (Jaqueline Gadsden, billed as Jane Daly), and the engineer Nicolai (Lloyd "Lost World" Hughes) carry on a love affair. None of this sits well with the duplicitous Baron Falon (Montagu Love, who played opposite John Barrymore in Don Juan), who wants the submarines as weapons of war and the Countess as his aristocratic bride. What ensues is a submersible chase to the bottom of the sea and back again, where they encounter sunken wrecks, giant octopi, and strange mer-men that occupy the dark and the cold of 20,000 fathoms. 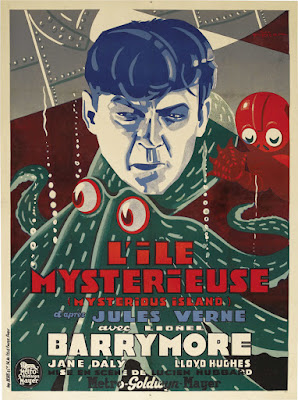 With the only connections to the original novel being the name of Dakkar and the fact that submarines are in it, one wonders why they bothered to call it The Mysterious Island at all. There must have been some mental loops in the decision to ascribe the name of Verne to it for marketing purposes when that name did not carry a whole lot of weight at that time. Inspiration is also taken liberally from Twenty-Thousand Leagues Under the Sea, and I would imagine that the proliferation of Michael Strogoffs had some influence on the decision to set the story in Eastern Europe and dress the cast in generically Russian clothing. An influential Franco-German production of Michael Strogoff, starring Ivan Mosjoukine, had been released only 3 years before.

There is an underlying theme of Old World, European aristocracy versus New World, American egalitarianism, and the use of technology for scientific discovery or for war, and those sorts of things. Nothing is really said or developed about them. They're just there. Lots of rousing action happens, especially when the Hussars under Falon commandeer the island, suppressing the workers while lying in wait for the first of the two submarines to surface from its first test run. The special effects are quite good for the time, and shine when the two submarines find themselves trapped in the underwater chasms belonging to the ancient lost race of marine men. When one of the submarines begins to flood, as submarines in submarine films are wont to do, effects deftly handle the tragedy. The costumes of the mer-men are a bit silly, but that's par for the course. 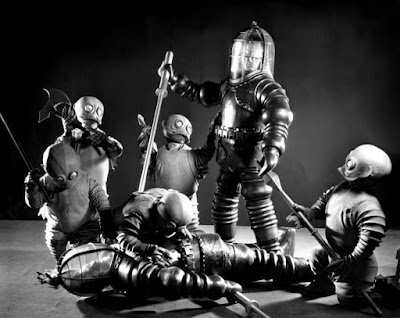 The advent of Talkies pushed back the completion of the film by several years. Production began in 1926 under the direction of Maurice Tourneur and Benjamin "Witchcraft Through the Ages" Christensen, but after Al Jolson started singing, many silent films were shelved or retooled. Tourneur walked off the set after a dispute with the producers, giving Lucien Hubbard the sole director credit. The entire film had been shot in expensive 2-strip Technicolor (with the coloured print only recently being rediscovered and restored), and then a trio of sound sequences were tacked on to the largely silent film. While it could have been a pointless novelty, Hubbard used sound to great advantage. The first of the sound sequences is right at the beginning: after a short, silent prologue establishing the setting, there is the astonishment of Barrymore and Love talking... Talking!! In the process of wowing audiences with their own voices (thankfully they both had good voices for cinema, unlike many silent era stars), they also got to knock out a good chunk of cumbersome exposition. The next two sequences are ingenious. While on its first test run, Dakkar surprises Falon with a device that allows them to communicate wirelessly with the submarine. They do, to the actual sound of Lloyd Hughes' voice. Later, when all Hell has broken loose, the submarine is lured into a trap by use of the same radio. The communication system is pushed within the film as a wonder of technology, and the theme is driven home by playing the scene out in a wonder of real-life film-making.

Where The Mysterious Island is also notable is that it is sometimes cited as the beginning of the modern age of Scientific Romances in film. No specific date for The Mysterious Island is given, but it is clearly meant to take place before the proliferation of either submarines or radio. This would place it before the early 1900's, as modern submarines had come into their own in the first decade and were employed to devastating effect in WWI (providing a bit of the subtext for Dakkar's reluctance to see his ships used for violence). Radio was already a significant mass medium by the Twenties. Whenever it takes place, it was clearly not modernized in the same way that The Lost World was. While set in the Victorian Era, much of The Mysterious Island resembles the sleekness of Science Fiction in the Twenties and early Thirties. Nevertheless, Rod Bennett, in his survey Voyages Extraordinaires on Film, argued that it was the first to deliberately set itself in that era:

I think we can say with confidence that the producers of The Mysterious Island were the first filmmakers in history who'd ever dared, with a breathtaking flash of invention, NOT to update a hopelessly out-of-date book. They took Jules Verne's daring predictions about the day-after-tomorrow and turned them into something else entirely—into a huge, elaborate alternate universe story. They created a 19th century of the imagination, where British Imperialists reached the Moon 75 years before Neil Armstrong, and electric submarines prowled the deep while Buffalo Bill was still prowling the West.

Unfortunately that gamble did not pay off for them the way it did for Walt Disney some 25 years later, when his 20,000 Leagues Under the Sea was a smash hit that provoked a rash of adaptations from Verne and other 19th century authors. It cost a staggering $1 million to produce (equivalent to $14 million today) and only earned back $55,000. To the minds of Hollywood, this only proved how outdated Verne was and even cast a pall over Science Fiction as a genre for a few years. The USSR would try their own version in 1941, Hollywood gave it a go in a 1951 serial that featured an invading army from the planet Mercury, and it finally got its due in 1961's epic effects film by Ray Harryhausen.