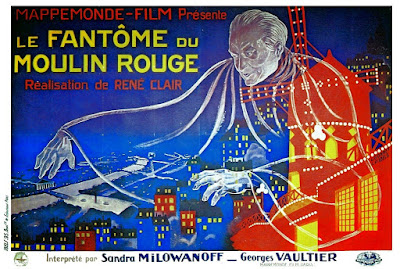 Le Fantôme du Moulin-Rouge (The Phantom of the Moulin Rouge) was the first full-length feature film by one of France's great silent film directors, René Clair. His very first film was the short subject  Paris qui dort, in which a negligent scientist creates a ray that freezes the residents of Paris in their tracks, except a small handful who happened to be above the ray's beam at the time. That 1924 production was joined by Entr'acte, to be shown as part of a Dadaist ballet.

Clair's interest in this early phase of his career lay in the surreal aspects of film, as one might except from his Dadaist connections. His plots are thin means to an end of experimenting with special effects and plays with perception. Le Fantôme du Moulin-Rouge begins with a former politician brought to heel by the editor of the most yellow newspaper in Paris. The editor wants the hand of his daughter - already betrothed to another man - or else he will expose a hidden political scandal that will ruin the former politician's reputation. The marriage is called off until they can get this sorted out, sending the jilted lover into a spiral of depression that lands him into the thrall of a scientist experimenting with hypnotism and out of body experience. Several days later, mysterious events start occurring all over the city, courtesy of Clair's trick photography.