Edwardian Fashion of the Space Age

According to the philosopher behind the Biblical book of Ecclesiastes, there is nothing new under the sun. Innumerable are the Internet commentators ready to point out there is nothing original, but rather, only those things that have been forgotten long enough to be recycled. Yes, nearly everything has been done before, and usually better. That includes retro Victorian-Edwardian fashion. 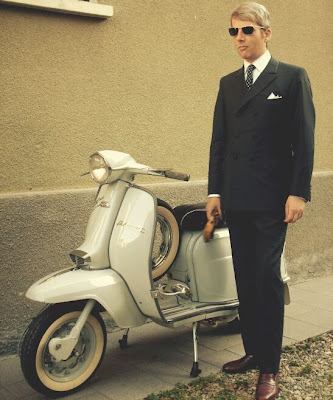 In the wake of the Second World War, fashion was in massive flux. Everything was, but as progress marched forwards, some sectors of society began looking to the past for reference points. In film and themeparks, primarily in the United States, it began a second round of nostalgia for the Gay Nineties... Those halcyon days of Main Street USA, with women in bustles and large, feathered hats accessorised by men in striped suits and straw Boaters. Science Fiction films utilizing Jules Verne and H.G. Wells came into vogue and Disney became its sainted patron.

Across the pond, this nostalgia took on a decidedly more aristocratic tone. Tailors in London's upper-crust Savile Row took it upon themselves to reclaim the dignity of mens fashion from the American "zoot suit" style and, most definitely, against the drab grey flannel of post-war British clothing rations. The Edwardian Era is often acknowledged by peacocks as the height of masculine style and bearing, therefore it was resurrected with some adjustments. 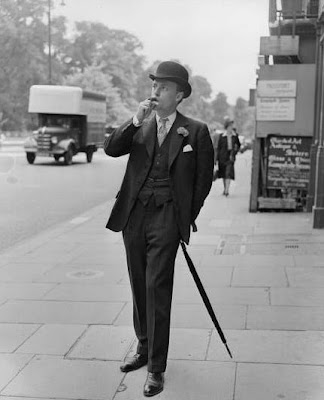 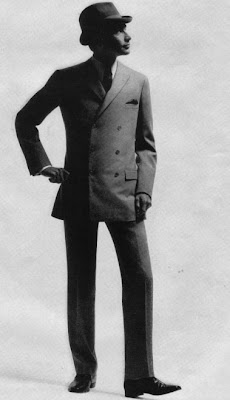 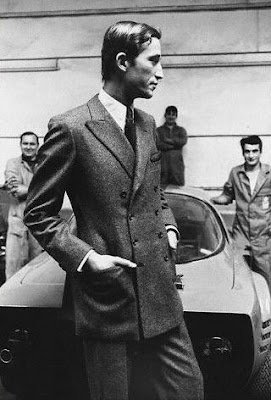 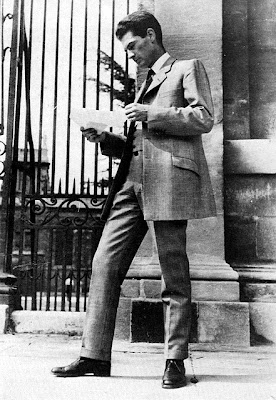 According to Richard Walker in The Savile Row Story: "The outfit featured slightly flared jacket, natural shoulders, slim waist, tight sleeves and narrow trousers; a curly brimmed bowler set atop a longer hairstyle and long, slim, single-breasted overcoat with velvet collar and cuffs completed the look." The Victoria and Albert Museum, who provide a handy guide to clothing from the Fifties, ascribe the origins of the style to the civilian dress of the Brigade of Guards, which included a Bowler and double-breasted coat. Not content with their lovely red serge uniforms, young guardsmen would don their civilian suits for a cruise down Piccadilly en route to the Savoy Turkish Baths.

The greatest proponent of the style was Neil "Bunny" Roger. One of the last great fops, Roger made a life of cutting along fashion's edge. Born to a family made wealthy in telecommunications, his nickname was granted by a nanny who imagined a resemblance. He studied art at the Ruskin for a time, intent on becoming a fashion designer, but was expelled on grounds of his emergent and flamboyant homosexuality. In 1937, family money established his own eponymous design house. After serving in the British Rifles during World War II, he invested in fashion both as a shareholder and as one of Saville Row's best customers. His annual order was around 15 suits at £2,000 each with matching shoes and accessories. Besides inventing the Capri trouser in 1949, Roger was notable in the early Fifties by sporting Neo-Edwardian suits. The suits, that is, and his scandalous, lavish fetish balls.


The Edwardian look became most popular amongst Guardsmen, bankers and other members of the financial elite, and London's gay establishment. There was no express complementary style for women, however. In 1947, Christian Dior released his first collection to a Europe starving for innovation after years of wartime austerity. The "New Look" was ushered in, featuring pencil skirts, rounded shoulders and tight waistlines.


New Edwardianism became an enviable mark of class distinction, economic affluence and British pride with a subtle undercurrent of subversive sexual proclivity. Thus it came to be adopted, in a manner, by youth of lesser class and means. Adjusted by teenage showiness and influences from Nashville, these rocking and rolling youngsters were labelled "Teddy Boys" by the media. Their most direct heirs, after a few generations of tweaking, are Rockabillies. For Teddy Boys ("Teddy" being a nickname for "Eddie" or "Edward"), this adaptation of the style had both a sense of emulation of the upper classes and a co-option of the same. In the poorest districts of London, procuring a suit could only be accomplished with funds raised by illicit means.


As New Edwardian style found itself employed beyond its original intent and losing its air of sophistication amidst torrents of lurid reports of juvenile delinquency, the Savile Row set dropped it like a hot stone. Popular culture always has a cultural lag, however, and Edwardianism eventually wound its way into television in the Sixties. Draped across William Hartnell in Doctor Who circa 1963, it was an example of dowdy datedness. Yet when tailored to Patrick Macnee and matched to the thoroughly modern Diana Rigg in 1965, it reclaimed some status as a symbol of British style. The Avengers is something of a stylistic microcosm of the time: a Spy-Fi drama with witty John Steed in Bowler hat, rarely without umbrella and teacup, behind the wheel of a Rolls-Royce or Bentley, equally matched by the intelligent and sexy assistant Emma Peel (really there is only one) in leather catsuits and Mod outfits, driving her Vespa, representing Swinging London. Though Ralph Finnes certainly looked good in the suit, Nineties "Cool Britannia" couldn't compensate for the original Avengers' context nor rescue the 1998 feature film.
A clip from The Avengers.

By the Sixties, the style also found its way into music and the Mod culture that surrounded it. One group in particular was noted for donning Edwardian suits to compliment mop-topped hairstyles. 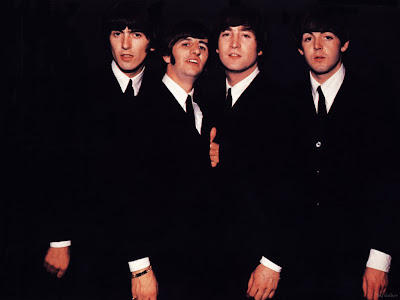 Very occasionally does New Edwardian style resurface, with no help from the myriad recombinations of brown, leather and brass. A prominent example was the Alexander McQueen suit paired with Phillip Treacy hat that graced the promotional materials of 2008's Royal Ascot competition. World renowned for its fashion, Royal Ascot is one of those last vestiges where smart attire is the enforced rule.