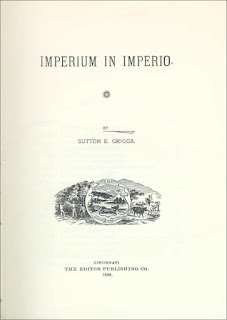 Imperium in Imperio is more of a political thriller than a science fiction novel, but its inclusion in the limited canon of pre-WWI African-American speculative fiction is indicative of how permeable the membrane of 19th century Scientific Romances was. Even Jules Verne's novels were more about geography, industry, wildlife, and foreign cultures in the far-flung regions of the world than about technological prophecies. Of the 54 novels in his "Voyages Extraordinaires" series, only a fifth or so have content that could be properly be considered science fiction today. The remainder are adventure novels, spy thrillers, and historical dramas.

The bulk of the novel follows the youth and education of Belgrave and Piedmont. The former is a child of a prominent white politician and a beautiful mulatto woman, who is kept in good financial stead by his father. Given the best opportunities, Belgrave is eventually sent to Harvard where his skill as an orator is refined. High hopes are held out for his career as a politician until tragedy strikes. A young African-American woman he falls for commits suicide the very same night he proposes to her. Her rationale? A eugenic theory that mixing of the races weakens African-American stock with indolent European blood. The only future for African-Americans, she believes and communicates in her suicide letter, is for complete segregation from European-Americans. To have fallen in love with a mixed-blooded person was a dissonance she could not reconcile in life. In her letter she also exhorts Belgrave to use his abilities and influence to do everything possible to segregate the races.

Belton Piedmont, on the other hand, would have every excuse to be embittered. Unlike his affluent classmate Belgrave, their elementary school teacher took an immediate dislike to yet another poor black child. Piedmont's intellectual and oratorical skill manifested, despite constant unfair treatment and neglect. After graduation, Piedmont's education continued at Stowe University in Nashville, one of the universities funded by Northern philanthropy. Despite this, racism still persisted amid the faculty, how had all the outward signs of generousity but still refused to let the sole African-American professor sit at the faculty table. After university, he became a teacher, met and married a beautiful African-American woman, and started a newspaper for the African-American community in Richmond. However, his dauntless exposés on government corruption (including the chicanery that denied African-Americans the vote) lead to him being ousted as a teacher. Piedmont was shuffled to clerk for the local postmaster, despite being entitled by law to the postmaster position itself, and that clerkship he lost by not supporting the racist postmaster in his bid for Congress. This and his skin colour barred him from any further employment for which an educated young man was qualified, so he masqueraded for a time as a woman to secure work as a household nurse until he was found out. The final blow came when his beloved wife gave birth to a white baby.

Devastated, Piedmont accepts a position as a teacher in Cadeville, Louisiana... Among the welcoming committee is the town doctor, who calls dibs on his corpse after he is lynched. And sure enough, Piedmont takes seriously an invitation to the local church, where he proceeds to sit in the wrong section and pick up a fallen handkerchief for a lady. Such offenses against propriety cannot stand and he is indeed lynched. Though presumed dead, he regains consciousness on the dissecting table, killing the doctor and disappearing into the night. When Piedmont resurfaces, it is in Waco, Texas, in the compound of the Imperium in Imperio, offering membership in the organization to Bernard Belgrave.

Despite the unrelenting humiliations and violence, Piedmont remains centred by key, influential lessons learned in his youth. Namely, the folly of revenge, the importance of forgiveness, and the dignity of the individual regardless of their race. From the latter originated both his resistance to ill-treatment and a refusal to merely cast European-Americans as a monolithic block of oppressive villainy. This closely reflects the author's own upbringing: the character of Belton Piedmont is very much reflective of Sutton E. Griggs' father, Rev. Allen R. Griggs, a former slave in Georgia, Baptist minister, and founder of both the first African-American school and African-American newspaper in Texas.

Sutton followed in his father's footsteps, becoming a minister and social activist who preached a message of racial integration and the power of personal virtue to raise the living standards of African-American communities. Not at all dulled to the external threats facing African-Americans, many of which were described in Imperium in Imperio, Griggs nevertheless felt that the biggest challenge facing his people was existential, coming from within their communities and within their own souls. Throughout Imperium in Imperio is the message that African-Americans must take initiative and "rise among the nations" to equality in education, morals and self-responsibility, entrepreneurship and resourcefulness, without relying on resistant European-Americans to simply bestow equal treatment upon them.

Griggs deftly shows a complicated tension that persists to this day between progressive values and liberal values. On the one hand we have a character who is as vengeful as he is privileged, keen to provoke a race war based on insane social and biological theories, whose all-consuming anger is entirely disproportionate to the relatively sheltered and affluent life he has led. The great tragedy of his life comes not from European-Americans, but from a fellow African-American whose life was tragically cut short by her embrace of leftist ideologies. On the other hand is a character who has every right to be angry and vengeful after a lifetime of violence and degradation, who nonetheless commits to an ideal of racial integration based in the dignity of the individual regardless of skin colour. Having to achieve on his own merits in a life adrift in American society, Piedmont experienced both the best and the worst of humanity... Seeing both mercy and mercilessness, forgiveness and the unforgivable, has given him an all-important perspective on humanity. He sees the Imperium as an effective body of negotiation to secure the rights of African-Americans. Belgrave sees it as an army to mobilize into violence to secure an independent African nation in North America. It would require a considerable imperviousness to current affairs to not see the parallels at play on university campuses, in African-American communities, and among the halls of political power today.

Though often cited as a utopian novel, Imperium in Imperio has an indeterminate ending… The future is still something to be cast. The framing device of the story is a traitor to the Imperium exposing its existence to stave off Belgrave's intended race war. This character is, in a sense, Griggs' own voice. The purpose of Imperium in Imperio is to creatively articulate the tensions, frustrations, and chthonic forces of post-Civil War African-Americans so that they can be redressed. There is no inevitability to Griggs' novella except that to leave these issues roiling will be disastrous for American society.

Imperium in Imperio: A Study of the Negro Race Problem can be found in Science Fiction of America's Gilded Age: An Anthology now available from Amazon. Click here to order your copy.
Presented by Cory Gross