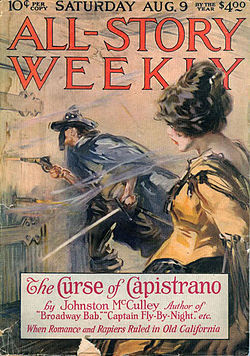 Originally published in the pulp magazine All-Story, The Curse of Capistrano introduced Zorro and his alter-ego Don Diego de la Vega to the world. While the various assorted swashbucklers of the past had their romantic appeal, Musketeers and Pimpernels working for the benefit of European aristocracies were a bit of a hard sell in the United States. Zorro was the first truly homegrown version of the archetype. Señor Zorro was not an agent of Alta California's governor or the Mexican authorities. In McCulley's California, the corruption goes all the way to the governor himself. Zorro's nefarious nemesis Capitán Ramon and his cronies were merely vultures at the scraps, using their position to exploit what the governor himself had overlooked in a pervasive culture of injustice. Zorro instead stood as a man among men, fighting against the corrupt system for the benefit of oppressed Natives, humble Franciscan missions, and the unfairly persecuted, eventually uniting to himself a militia of gentry to confront the governor. The Curse of Capistrano could very well be taken as a veiled recapitulation of the American Revolution.

A few problems arise in this narrative in the same sense that these problems arose in the real American Revolution. For one, Don Diego de la Vega is a caballero, the heir to a wealthy rancho, with the Old Blood flowing through his veins. Like the relatively affluent and positioned men who thrust the 13 Colonies into a revolution because they didn't like the idea of paying taxes to England or being prohibited from simply taking Native lands for themselves, he is a the closest thing to an aristocrat in the region, who is fighting for the people whose oppression made his wealth possible. In historical fact, the great ranchos of Alta California were built on lands and Native labour forcibly separated from the Franciscan missions. Even then, the ranchos weren't so great: California during the years of Mexican administration (1821-1846) was a forgotten and impoverished territory rich in cattle and crops but poor in material wealth. The decadence of Mexican California (and even Spanish California) as portrayed in the book and subsequent adaptations simply did not exist. We can allow, however, that historical fact was not high on McCulley's list of priorities when writing The Curse of Capistrano.

For McCulley, and the American public who took to his creation, Zorro represented the great dashing hero who used his affluent means to fight for the poor and downtrodden. He may have been a purebred, but that only confirmed an inner nobility against the ravenings of institutional authority. In any way that counted, he was on the side of the huddled masses. Whether it was paternalistic didn't matter: it was romantic, picturesque, heroic, and a just plain decent thing to do. The Curse of Capistrano invented a pleasing cultural myth to stand alongside Paul Bunyan (created in 1916), Pecos Bill (created in 1917), and other instances of "fakelore", giving shape to American identity in the era of World War One and its aftermath. Zorro provides an ideal for Americans wondering at their country's new role in the 20th century, as well as solidifying the country's "ownership" of its multicultural heritage (in this case, events taking place before California was annexed during the Mexican-American War).

Furthermore, the Alta California of decadent ranchos, quaint religious devotion, and hot Latin blood tapped into an infatuation with the State of California that was only growing with the birth of Hollywood. Though McCulley mirrored latent feelings of American republican justice, it's actually not Zorro's fight against injustice that occupies the majority of the attention in The Curse of Capistrano. A full half of the novel goes by before we actually see Zorro avenging any wrongs. Instead, the greater fixation is on the love quadrangle between Señorita Pulido whose family has run afoul of the avaricious authorities, Zorro, his alter-ego Don Diego, and Capitán Ramon, which at times reads more like a Harlequin romance. Undoubtedly this combination of historical romance and sexual tension helped secure the success of The Curse of Capistrano. The following year, The Curse of Capistrano was collected in a single volume and re-titled The Mark of Zorro to coincide with the first of the masked avenger's many cinematic appearances.


Filmmakers and media mavens were quick to recognize the appeal of this bandito for justice. No sooner had Johnston McCulley's character first appeared in print in 1919 than the film rights were scooped up by none other than Hollywood's top action star, Douglas Fairbanks. In it he found the perfect vehicle for his patented brand of swashbuckling acrobatics and thrilling swordplay, creating the very first picture released by United Artists, the production company founded by him, his wife Mary Pickford, Charlie Chaplin and D.W. Griffith.

The Mark of Zorro would also inspire wider aspects of pop-culture: the debt owed to Zorro by comic book creators Bob Kane and Bill Finger was acknowledged when it came time to reveal the origin of The Batman. It was a showing of The Mark of Zorro that the Waynes were returning from when a mugger killed Thomas and Martha, the parents of young Bruce Wayne (which has since changed to the 1940 version starring Tyrone Power). Five years later, Fairbanks would return in Don Q, Son of Zorro.

Zorro would go on to star in some 40 films, as well as movie serials and television series, the most recent being those starring Antonio Banderas. In The Mask of Zorro (1998) and The Legend of Zorro (2005), Banderas plays Alejandro Murrieta, a vagabond outlaw who is trained by Don Diego de la Vega (Anthony Hopkins) to take up the mantle of Zorro and rescue his daughter (Catherine Zeta-Jones) from his arch-nemesis. Like Wild Wild West (1999), these two Zorro films made liberal use of events from America's history to springboard their tales of Western adventure.


Perhaps the most famous version of Zorro is Disney's television series, which ran for two seasons between 1957 and 1959. It was the third television series developed by Disney in as many years, having begun in 1954 with the Walt Disney's Disneyland anthology series (which gave the world Disney's version of Davy Crockett) and The Mickey Mouse Club children's variety show. Zorro was the studio's first attempt at a sustained, narrative, dramatic half-hour show. Male model Guy Williams was cast as a pitch perfect Zorro, whose Don Diego de la Vega managed to forego an utterly insufferable effeminacy found in other adaptations to instead portray a genial, charming, humorous, and dispassionate aristocrat. Each season ran two 13-episode story arcs, with the first 13 episodes loosely adapting The Curse of Capistrano. Seven of those episodes were condensed into a 1959 feature film entitled The Sign of Zorro.

Unfortunately, Disney's Zorro was cut down at the height of its popularity by a squabble between the studio and ABC, which lead to the cancellation of all three of Disney's television outings. Guy Williams and co. would reappear for  four one-off episodes on the new Disney anthology series - Walt Disney's Wonderful World of Color (now Wonderful World of Disney) - on NBC. References to Zorro are few and far between on Disney property and in Disney's marketing, which is unfortunate given the quality of the show. Williams performed in character as Zorro in Disneyland, swashbuckling across the rooftops of what is today the Rancho del Zocalo Restaurante in Frontierland, the sign of which now bears a silhouette of the masked avenger. Storytellers Cafe in the Grand Californian Hotel is adorned with murals of classic Californian stories, including The Curse of Capistrano. The last home video release for Disney's Zorro were as now out-of-print DVDs in the defunct Walt Disney Treasures line.

Several new adaptations of Zorro are currently in development, ensuring that the original American swashbuckling hero fighting for justice against the corrupt will not disappear.
Presented by Cory Gross