The Monster of Lake LaMetrie by Wardon Allan Curtis

The Monster of Lake LaMetrie is an early Weird Western tale and one of the earliest extant examples of truly Weird Fiction applied to the Western, rather than "merely" inputting a scientific or supernatural concept. Published in Pearson's Magazine in September 1899, this short story by Wardon Allan Curtis, it is subtitled as Being the narration of James McLennegan, M.D., Ph.D. and is framed as the extracts from a diary sent to Professor Wilhelm G. Breyfogle, University of Taychobera, from McLennegan by way of Captain Arthur W. Fairchild of the US Army.

McLennegan, being a scientist and having heard of strange occurrences in Lake LaMetrie, takes trip up to these high Wyoming regions with his constitutionally ill friend Edward Framingham. On McLennegan's part, the appeal is a phenomenon of bubbling and broiling at intervals in the lake's middle, after which are found odd specimens of plant and animal washed ashore. The plants are those that might only be found today in coal fossil deposits. The fish populating the lake are bony ganoid types long-extinct. Framingham, an intelligent and astute person with a scientific mind, is admittedly more interested in the fishing and the rarefied air in which he hopes to find relief from his dyspepsia.

There is little rest to be had after McLennegan makes his great discovery. A flitting at his elbow causes him to lash out with his machete, nearly severing the head of a massive Elasmosaurus. It rose, he believes, during the particularly violent flooding and broiling of the night before and confirms for him the suspicion that the lake is somehow connected to the primordial interior of the earth. Nevertheless, he now has one dead Elasmosaurus in danger of lashing out in its death throes, so he removes it brain for study.

The shock comes when he finds the beast still alive days later. It is lying on the beach where he dissected it, but it is still breathing and, furthermore, the wound in its head is healing. So durable and primitive is this marine reptile's physiology that it may very well survive the removal of its brain! Another happenstance pulls this experiment into Frankenstein territories: Framingham, overcome with his worst bout of fever yet, attempts to kill himself with a slash across the neck. He only partially succeeds, for his body will die but his brain lives yet. Given a living Elasmosaur body without a brain and a man's brain with a dying body, McLennegan does the only logical thing.

What follows is a brief but surreal exploration of Victorian anxieties about evolution and the distance between the human intellect and bestial instinct. The Monster of Lake LaMetrie is also a provocative metaphor for the uncivilized character of Western expansionism. Though the Wild West was not so wild as legend makes out - the most deaths any one town saw during the whole settlement era was five, and the year of the Gunfight at the OK Corral was Tombstone's bloodiest ever with a deathtoll of three - it was still a rough and unforgiving existence. It could take the brightest minds and, as though transplanting them into a prehistoric monster, preoccupy them with the basest needs of survival. That is until the civilizing powers of the government and the military pacify the landscape.

Without further ado, Wardon Allan Curtis' The Monster of Lake LaMetrie as it appeared in Pearson's Magazine... Click on each page for a larger version. 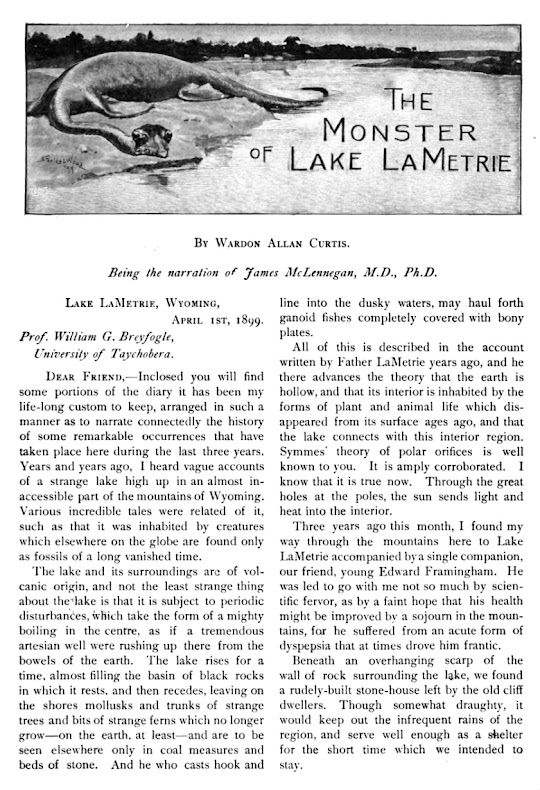 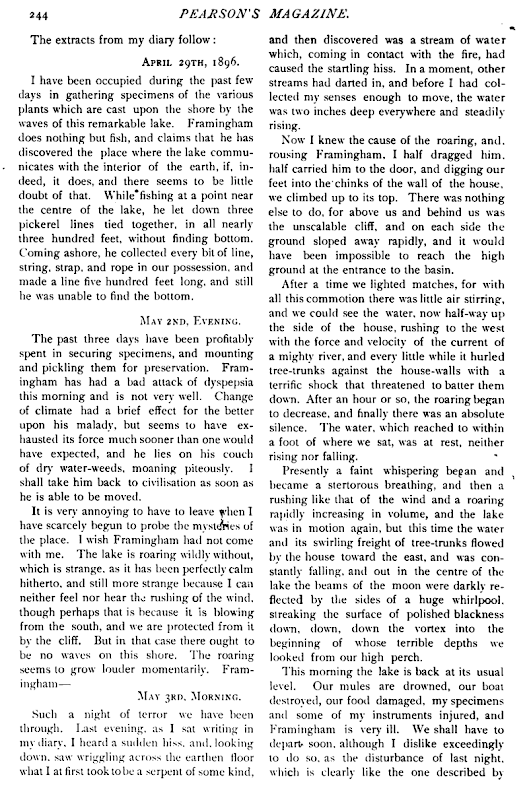 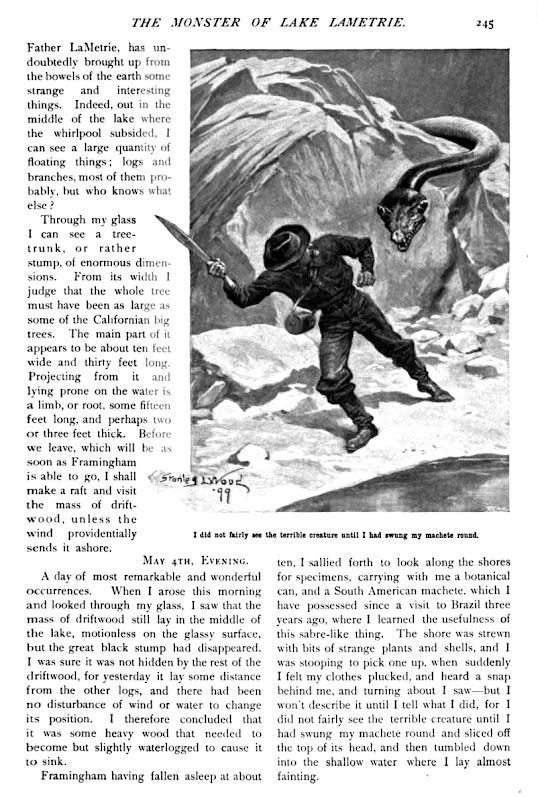 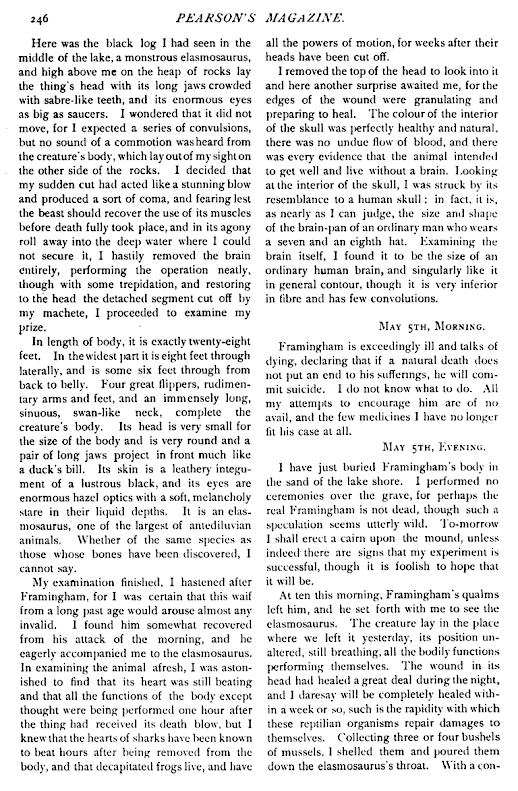 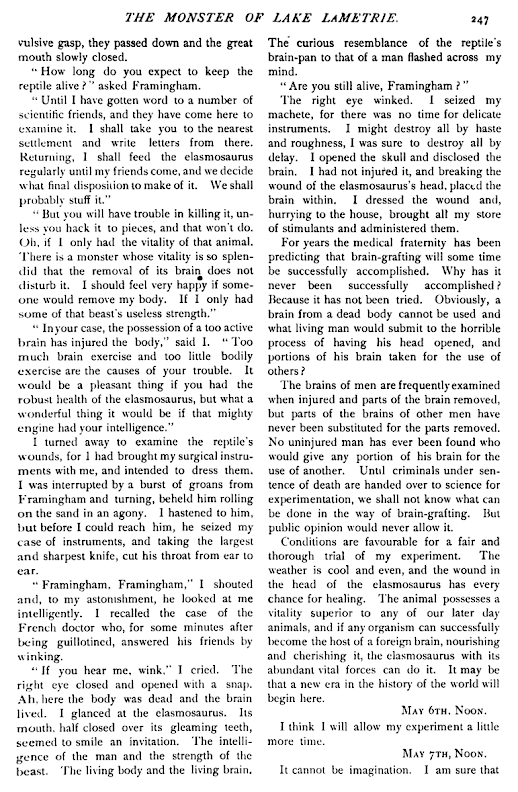 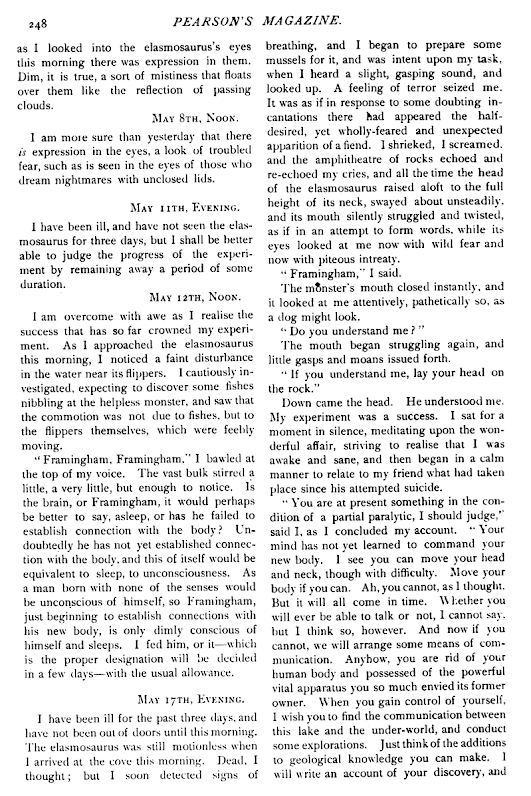 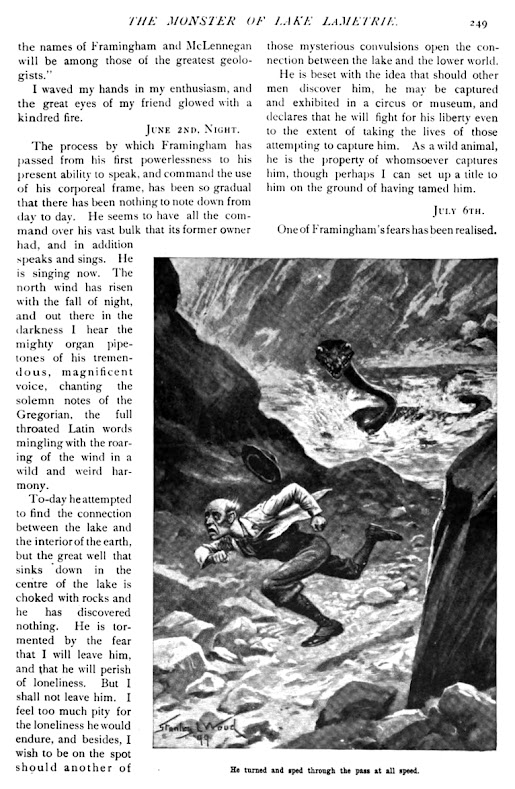 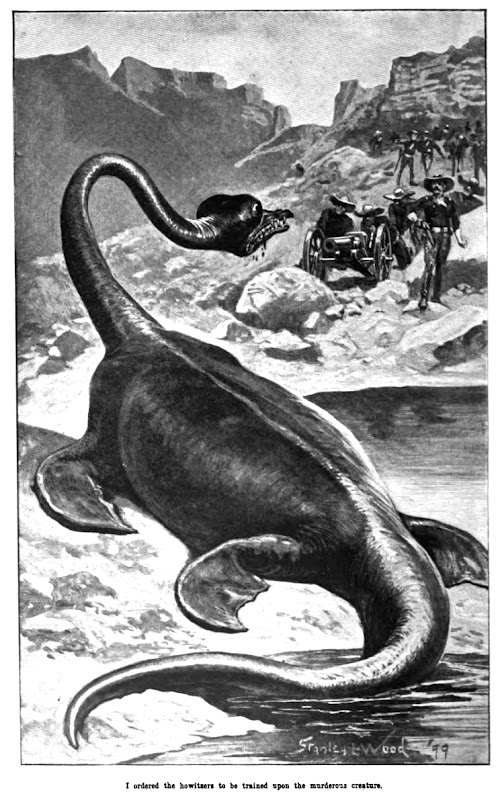 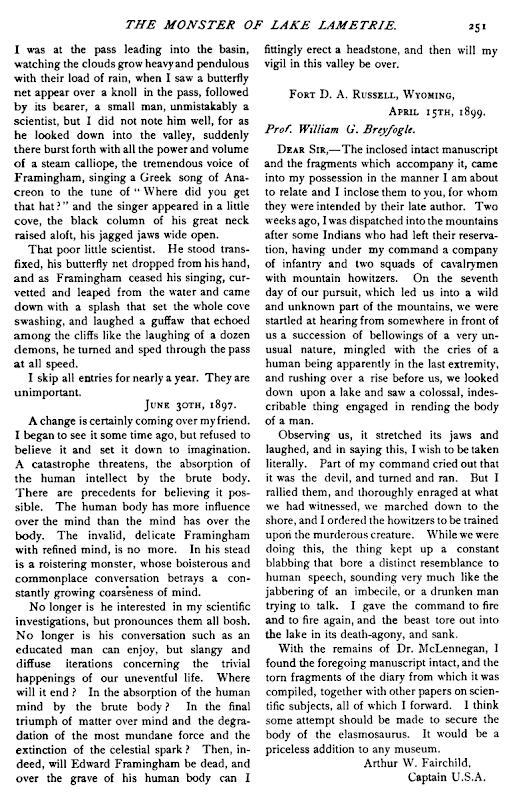 The Monster of Lake LaMetrie and numerous other stories are available in Science Fiction of America's Gilded Age: An Anthology, edited by C.W. Gross. Click here to order your copy.