There are a handful of good reasons to read the utopian ideals of the past. One might simply be the aesthetics of Victorian retro-futurism, seeing how people of the 19th century actually did envision the things we take for granted today: our televisions, computers, the Internet, mass transit, and so forth. Sometimes it is to play a little game of what they got right and what they got wrong. But deeper than that, they are an opportunity to understand the "interior world" of different philosophies and worldviews... To understand not only their ambitions for people and society, but what they think of people and society in general. Nested into utopian fantasies are theses on human nature, human failing, and human interaction.

It is one thing to analyze failed Victorian worldviews through Victorian fiction... It is another to analyze worldviews that are still carried with us today, worldviews which never left or which get perennially resurrected. This is even more pertinent when the worldview is not simply a failed worldview of the past, but a worldview that is currently failing us today. And that is what brings us to Lillie Devereux Blake's A Divided Republic.

Published in two parts in the February and March 1887 issues of The Phrenological Journal and Science of Health magazine (which is interesting enough in itself) and eventually reprinted in her 1892 anthology A Daring Experiment and Other Stories, A Divided Republic argues for women's suffrage by proposing that women simply up and leave. En masse, the ladyfolk of the Eastern United States migrate to the territories of Washington, Oregon, Idaho, and Montana. In return, the men from those territories are shipped back East. Left to their own devices, male society rapidly deteriorates until they literally beg to get the women back.

At the root of Blake's thought experiment is the idea of what we would today recognize as "identity politics." This philosophy, which has regained considerable traction in the last decade, fundamentally rejects the idea of individual personhood and dignity. In its place, identity politics holds as axiomatic truth that individuals are reducible to actors on behalf of identity collectives. As actors for identity collectives, individuals work to reinforce structures that maintain power for the collective. In this worldview, there is no such concept of human rights because there is no such concept as human beings. Rather, identity collectives are conceived of having or lacking "privileges" which are exercised by the collective as a collective.

Though self-evidently wrong, more serious and considered forms of identity politics manage to focus on identity collectives that may actually give shape to behaviour, like religion and philosophy, political affiliation, or nationality. Less well-considered forms will at least base identity on tangible assets like economic class or ethnicity. The worst and most self-evidently false forms of identity politics focus on crude physical attributes, namely race, gender, and sexuality. These physical attributes are believed to form coherent blocks of political interest, usually in dialectic opposition to collectives with other attributes, i.e.: Men vs. Other (Women, Trans, Nonbinary), White vs. Other ("People of Colour"), Straight vs. Other (LGBTQ2+AA), Cis vs. Other (Trans, Nonbinary, etc.).

In what way are they self-evidently wrong? For the simple fact that people are individuals and never, in the entire history of humankind, have skin colour, genitals, or where people stick those genitals ever formed a coherent block of political interest. For the approximately 8,000 years that "white people" have existed, they have always been divided by ethnicity, nationality, economic class, political affiliation, philosophy, and religion, not to mention the naked interests of personal self-preservation. In the entire 19th century, there were approximately 7 years, added together, where there wasn't being a war being fought somewhere in Europe. Mark Twain once quipped that no one has spilled more French blood than other Frenchmen. For thousands of years prior to the arrival of Europeans to the shores of Africa or the Americas, Indigenous people fought with each other. Many of those resumed in terrifying ethnic conflicts after Europeans pulled out, such as the Rwandan Genocide. The Spanish were only able to conquer the Aztecs because they were assisted by other Indigenous nations who were sick of the Aztecs' bullshit. The evil of the Trans-Atlantic slave trade would have been impossible without the crucial first step of African peoples being captured and sold by other Africans. In the United States, slavery was abolished after 1.8 million "white people" fought a civil war against 750,000 other "white people." The term "People of Colour" is especially bizarre, as though Zulu and Japanese and Pakistani and Apache are all the same thing. These truths are so self-evident that even proponents of identity politics themselves realize it, inventing concepts like intersectionality theory. By admitting that people are shaped by a nearly infinite variety of intersecting identity vectors, it becomes apparent that the ultimate end of intersectionality theory is individualism. Everyone is different, and the only way to deal with individual people is as individuals. Intersectionality theory is a tacit admission that identity politics doesn't work as a model of reality. Identity politics is racism rebranded as "social justice," and the only antidote to racism is individualism, not more racism.

That "white people" and "People of Colour" and men and women and gay people and straight people and cis people and trans people fall everywhere across the political, religious, ethnic, national, and economic spectrum is distinctly highlighted by a story like A Divided Republic. Blake's story hinges first on the notion that women, as an identity collective, would just all agree to leave as one united body of coherent political interest. That simply would not happen. Gender does not form coherent blocks of political interest, especially where it would come to completely abandoning husbands, fathers, children, and alcohol. According to a 2013 survey, only 23% of American women identified as feminists (with 8% identifying as anti-feminists), even though 82% believe in equality of the sexes. One of the most shocking outcomes of the 2016 US election is that 42% of women voted for Donald Trump, which rises to 62% for "white" women without a college education.

Blake goes on to portray life in the respective republics. The male republic is, of course, every crude stereotype of men. It is a brutish, careless, reckless, vice-riddled society deprived of its civilizing members. By contrast, the female republic's greatest problem is boredom. A society composed entirely of women would be far too civilized... Without a need for police, courts, and jails (and saloons), the female republic could turn its attention fully to the moral, physical, and intellectual perfection of its members. The type of culture described briefly by Blake was given a fuller treatment in Charlotte Perkins Gilman's 1915 novel Herland, where it was also granted more of a critique (albeit possibly unintentionally). Perfection is dull and eventually the women are excited to hear that the men are willing to make every concession just to get the women back. It would be unthinkable that women might have conflict between themselves, because that would imply that women are individuals with their own personalities, ambitions, and problems apart of the interests of the collective. It was also unthinkable that amidst architecture, engineering, and mountaineering, one of the things they might also pick up now that there are no men to stop them is alcohol.

A Divided Republic is a short story... this critique is almost as long as the story itself... so one cannot reasonably expect Blake to give more nuanced portrayals of the benefits and challenges of her two republics. Yet when forced by brevity to distill her idea down to its most basic form, it is this: the essential characteristic of women as an identity collective is morality and the essential characteristic of men as an identity collective is barbarism, and therefore men need women to civilize them, and therefore men owe women the vote and the veto over men's lives. The idea that women are inherently more moral, more pure, more honest, and more civilized still permeates identity politics to this day, along with the patronizing idea that women are also weaker, more naive, more vulnerable, and less capable of managing their own affairs, thus requiring the paternalistic involvement of the State in every aspect of their lives in order to keep them safe. What they need to be kept safe from, of course, is men, who should apparently be packed with a WHMIS label.

Of course women were rightly entitled to the vote and to full legal equality. But that entitlement was not owed on the grounds that women as an identity collective are just better than men. They were rightly entitled to it because they are human beings, fellow individuals who are no better and no worse than men. Unfortunately, despite a brief flirtation with a properly ordered idea of social justice rooted in individual dignity -  "I have a dream that my four little children will one day live in a nation where they will not be judged by the color of their skin but by the content of their character." - the kind of identity politics expressed in A Divided Republic have taken hold again.

Without further ado, A Divided Republic by Lillie Devereux Blake, as it appeared in The Phrenological Journal... 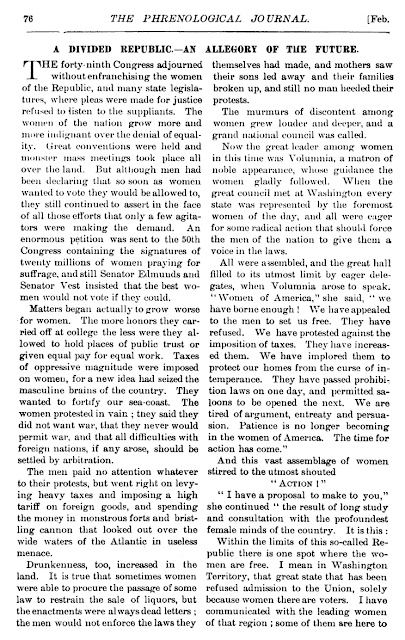 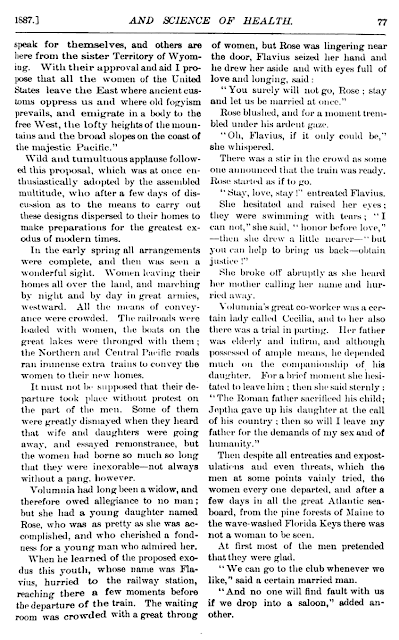 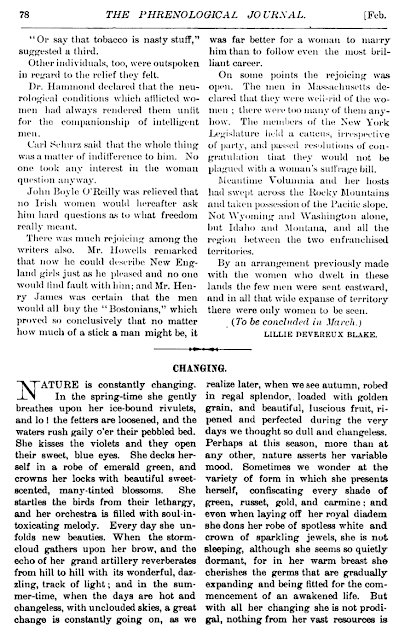 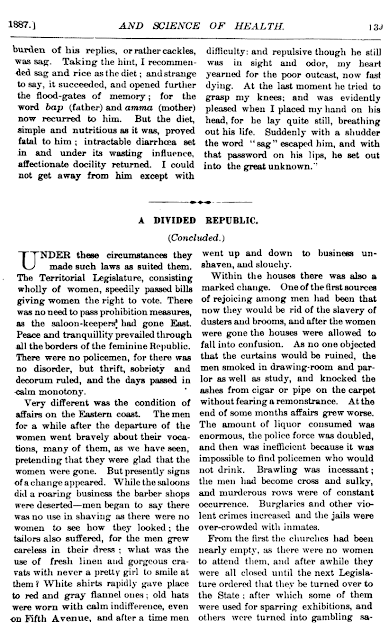 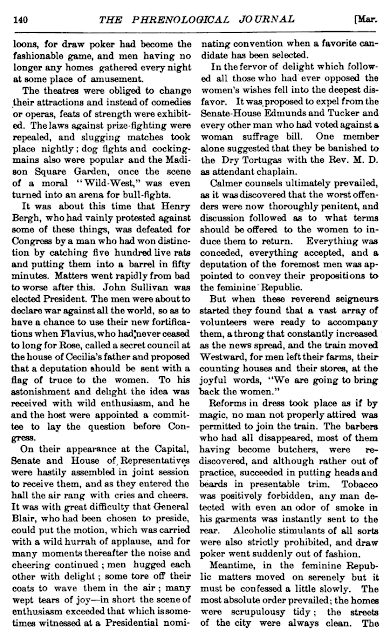 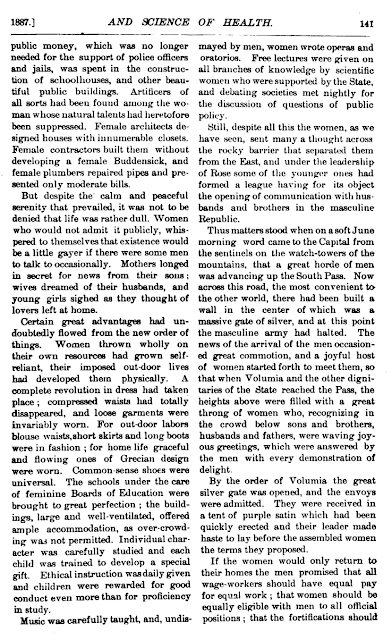 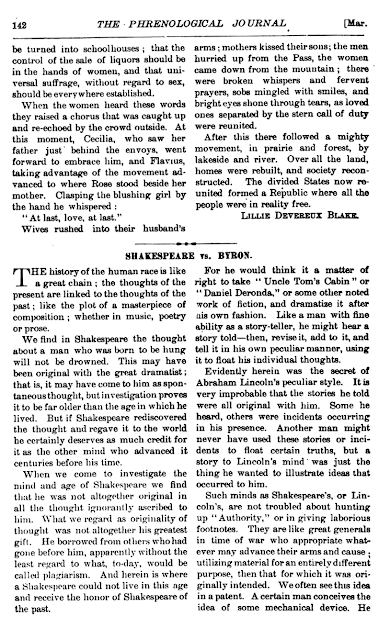