Aesthetic was perhaps the best part of Tomorrowland '98. When the original Tomorrowland of 1955 was remodeled in 1967, it adopted the cold, antiseptic functionality of NASA. The very mechanical-looking Astro Jets, for example, were replaced by the Rocket Jets, which spun little rocket ships around a model of a Saturn rocket. Unlike the sleek mid-century Moonliner rocket that served as Tomorrowland's original icon, this new Saturn was certainly functional. It mirrored the present reality of space flight and left the fantasies of the Fifties behind. While a few of the graceful lines of Googie style were built into Tomorrowland '97, it still carried itself with an air of sterility.


An excerpt from the opening day TV special for Tomorrowland '67.

The great appeal of Scientific Romances is their humane sense of style. Rather than antiseptic sterility, Jules Verne's inventions carried you through outer space, inner space, and liquid space in a crushed velvet armchair on a Persian rug, surrounded by well-stocked curio-cabinets and oil paintings, bookshelves brimming with leather-bound tomes and sidetables with Tiffany lamps to read them by. The imagined future of Scientific Romances more closely resembled Main Street USA than Tomorrowland '67.

The main value of Tomorrowland '98 is that it gilded this future once more. Though highly criticized, the hues of gold, copper and bronze indeed added a richer Earthy glow. The Vernian aesthetics were also criticized as belonging more organically to Paris than to mid-century Californiana (perhaps the most salient critique), but Tomorrowland '98 skillfully integrated many varied strains of Retro-Futurism. 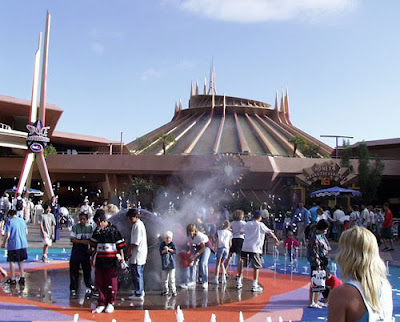 The sterility of NASA was mostly gone (and I will concede but one point: that the iconic Space Mountain should have remained white). In its place came an amalgamation of Renaissance, Victorian, Art Deco, Googie and modern references. The present day and the near future were excellently represented in an exhibit produced by NASA that included models of new type space shuttles and space suits, Martian rovers, and a genuine piece of Lunar rock. The America Sings animatronic musical show in the carousel theatre was replaced with the trade-show style Innoventions. The grounds were replanted with an "Agrifuture" theme of edible decorative vegetables. 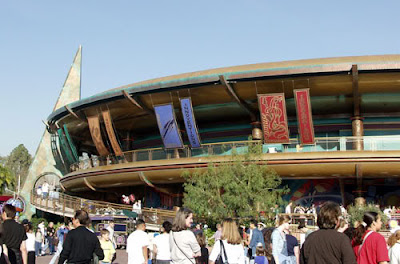 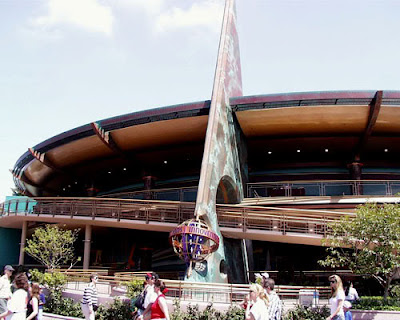 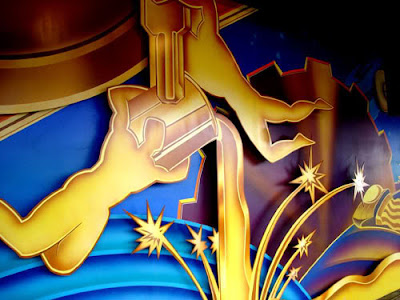 If anything, the indirect aesthetic inspiration for Tomorrowland '98 came from the kind of intricate and earth-toned designs in such works as Star Trek: Deep Space Nine and Disney's The Black Hole than from any other single source. In turn, Tomorrowland '98 prefigured the 18th century spacefaring motifs of Disney's own Treasure Planet. Several murals and exteriors imitated WPA and Soviet Constructivist art. The Rocket Jets were replaced with the gigantic brassy astrolabe of the Astro-Orbiter. The Tomorrowland '67 Googie style architecture remained firmly in place anyways, and the Moonliner made its return as decor for a Coca-Cola stand. 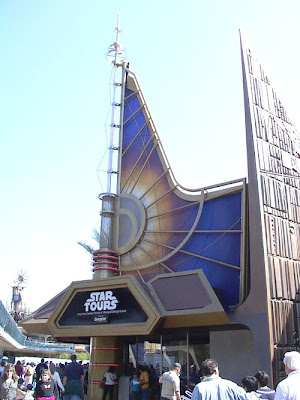 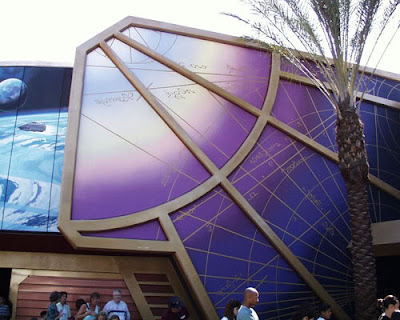 Which brings us to another of Tomorrowland '98's great strengths. This incarnation of Tomorrowland was less about Futurism than about Retro-Futurism, and so it became its own reference point: Tomorrowlands past, both in the park and on Disney's television programs, became lovingly nostalgic source material. As mentioned, the Moonliner made a semi-triumphant return after decades. While, sadly, the Mission to Mars simulator was gone, the Redd Rockett's Pizza Port eatery that replaced it featured a collection of past Tomorrowland attraction posters. A new mural, in WPA style, depicted many previous Tomorrowland attractions, including the Moonliner, Adventure Thru Inner Space, the World Clock, the Peoplemover and the Nautilus. One of Disneyland's greatest selling features is its historicity as Walt Disney's original park, and Tomorrowland '98 became, in many ways, a celebration of that historicity. 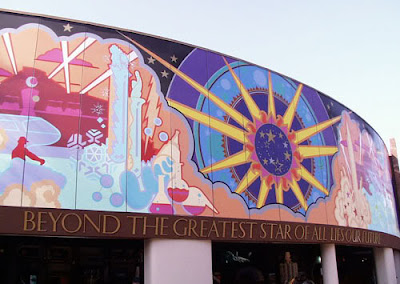 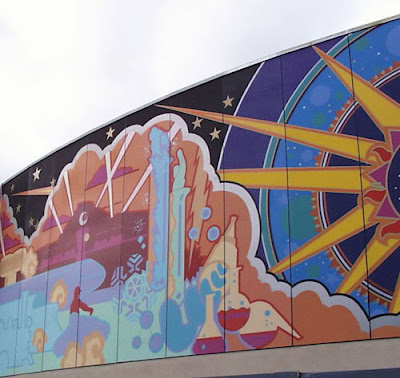 The pinnacle of this was the queue for what was supposed to be the new Tomorrowland's new headline attraction, Rocket Rods. This attraction ate up two previous attractions: the Circlevision theatre, which became the queue, and the Peoplemover, which became the Rocket Rods' track. The queue, however, made use of the space and the 360o Circlevision to become a veritable Tomorrowland museum.

In the former Circlevision preshow area, original ride vehicles for the Rocket Jets, Peoplemover, and the Mark III Monorail were put on display alongside illuminated blueprints for many of these ride vehicles, up to and including the Rocket Rods. Both the Circlevision and preshow screens showed a reel of nostalgic footage of Walt Disney from the 1958 TV special Magic Highway USA, featuring classic animation of the vehicles and transportation solutions of the future (itself the thesis statement of Autopia). Old Circlevision film footage was used in this presentation, preserving elements of the previous attraction.

The Rocket Rods didn't last that long, however. This keystone attraction failed mightily on account of no-account accountants who didn't recognize the cardinal rule that you have to spend a dollar to make a dollar. The budget required to make the Rocket Rods actually work properly was stripped away. Forcing a ride built for speed onto the winding and unbanked Peoplemover track resulted in continuous breakdowns and closure after only two years. Furthermore, the structural stresses placed on the track itself mean that the Peoplemover can never return.

To make matters worse, the classic Submarine Voyage was closed in 1998 and remained so, even though the Imagineering department fought to update it with an Atlantis: The Lost Empire (2001) overlay that would have worked perfectly with the Tomorrowland '98 aesthetic. The Observatron kinetic sculpture that sat in the old location of the Rocket Jets constantly broke down as well, after already being whittled down from a laser light spectacular to a rotating pile of abstract art by the accountants. The loss of Mission to Mars to a pizza eatery was lamented. Honey, I Shrunk the Audience was adequate, but paled to blue-sky plans for the construction of a full Primeval World attraction based on Animal Kingdom's Dinosaur. This "lost attraction" would have integrated with the existing Primeval World diorama along the Disneyland Railroad, and explained by way of "temporal bubble" why the DLRR suddenly passes through prehistory. Tomorrowland '98 lost five headline attractions, was denied a sixth, and of its three new attractions, one didn't work and another was an uninspiring corporate trade show.


All this spelled the doom not only of Tomorrowland '98, but of Tomorrowland as a whole. The management responsible for this travesty was ousted, the more capable management of Matt Ouimet took over, and Tomorrowland was repainted back to sterile whites and blues in time for Disneyland's 50th anniversary. Since then, however, little else has returned. Though Space Mountain was repaired, the Peoplemover track remains empty. The Circlevision is completely gone, replaced by Buzz Lightyear's Astro-Blasters. To service Buzz Lightyear, the NASA exhibit has become an empty hollow of lockers, fastpass machines and strollers. The Submarine Voyage has returned with a Finding Nemo overlay, which further cemented this former land about the future (or retro-future) as a random catch-all for franchise IP. The Jedi Training Academy occupies the Tomorrowland Terrace and Star Tours has been "revitalized" by incorporating footage from the inferior Star Wars prequels and sequels. Despite the entire Star Wars: Galaxy's Edge land opening in 2019, there seem to be no plans to free up space in Tomorrowland dedicated to the franchise. Honey, I Shrunk the Audience was removed, but instead of Primeval World, Disney resorted to a creepy return engagement of Captain EO on the heels of Michael Jackson's profitable death. After Captain EO left once more, the theatre has been used as a preview theatre for upcoming feature films.


The cumulative effect is an aimless Tomorrowland with no real guiding vision; an unfortunate mish-mash of fantasy movies and CGI cartoons with even less resemblance to the themes of Tomorrowland's dedication than the 1998 refurbishment. If only dollar signs hadn't gotten in the way of what could have been a truly fantastic idea.

Thanks to Jeff Keller who, years and years ago, gave permission for me to use his photos of Tomorrowland '98 which illustrate this article.
Presented by Cory Gross