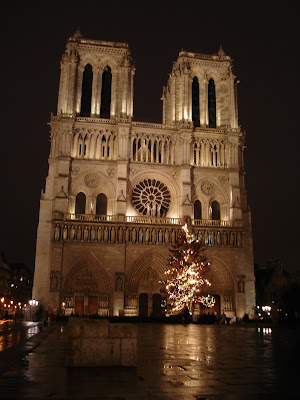 It's well known that I have a connection in my heart to France, and to nowhere is that connection deeper than to the Cathédrale Notre-Dame de Paris.

Notre-Dame is an icon of the city and the supreme example of the Mediaeval genius for both faith and art. The appreciation of Beauty is the aspiration towards the enduring, the transcendent, and the sacred. Beauty is the splendor of Goodness and Truth, their radiance into the world in modes far deeper and more powerful and more moving than an ethical or scientific debate. That is why Beauty - true art, the autonomy of art, uncontrollable art unfettered by propaganda and politics, art of the human experience - is always the first thing to come under attack in zeitgeists that seek to extinguish Goodness and Truth. The quest for Beauty is the longing for meaning. Few, if any, man-made places are as beautiful to my eye as the Cathédrale Notre-Dame de Paris.

Cathédrale Notre-Dame de Paris is centuries of devotion and sacrifice petrified into stone. Statuary adorns it in high places that no Earthly eye is able to see. It moves humankind exactly because it was the best of humankind poured into something built to the glory of God. It is sublime and ageless, having survived disaster, desecration, and dilapidation before being restored to its rightful place as a jewel in the crown of Christendom. The July Monarchy deliberated on whether or not to tear the venerable cathedral down, after it had suffered so cruelly by the French Revolution's hatred of all Goodness and Truth and Beauty. Yet a popular novel by Victor Hugo reignited passion for everything about the romance of mediaevalism, patriotism, and religiousity that the cathedral represented. Notre-Dame was not only a symbol for the Church or the nation of France, but for the growing dissatisfaction with the failed promises of modernity. That is also what it represents for me: a living, ancient, enduring emblem of the romance of history, majesty, and faith.

Notre-Dame figured prominently in my two trips to Paris, once during a brief layover in 2008 when it was one of only three attractions I had time to visit (the others being the Eiffel Tower and Disneyland Paris) and again in 2013 when we passed it nearly every day for two weeks. I lost track of the number of times we stepped inside to offer devotion, but its awesome presence, the breath of the Spirit moving through it, the weight of its ages and the innumerable people who have passed there all seeped into my bones. In the words of Sinclair Lewis: "He who has seen one cathedral ten times has seen something; he who has seen ten cathedrals once has seen but little; and he who has spent half an hour in each of a hundred cathedrals has seen nothing at all."

If there was any one building that I would consider my spiritual home, even more than my local parish, it would be the Cathédrale Notre-Dame de Paris. It broke my heart beyond words to see the terrible images of its roof ablaze on April 15, 2019, and all I could do not to burst into tears at the good news that the stone structure was saved, along with the three rose windows and majority of the stained glass, and all of the art and relics. She still endures. Thanks be to God. 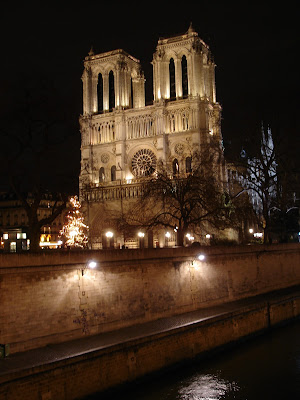 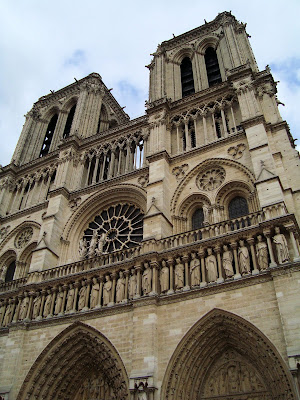 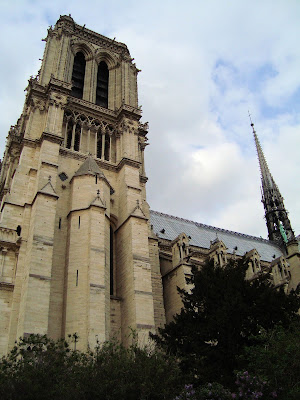 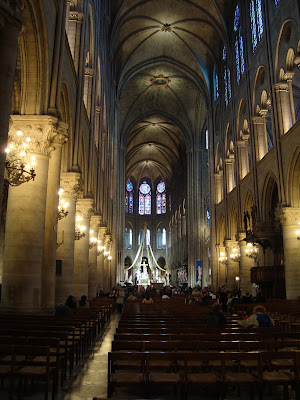 My only interior shot. While the interior of Notre-Dame is even more
photogenic than its exterior, I have a general policy against taking photos
inside sacred buildings out of respect for the intimacy of their purpose. 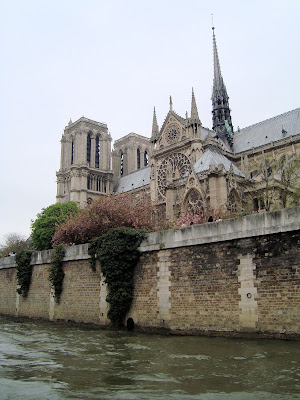 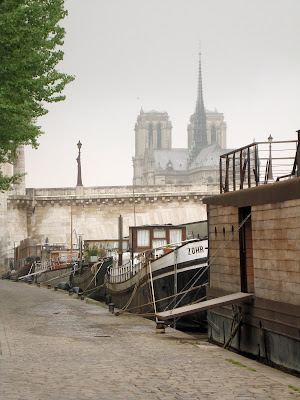 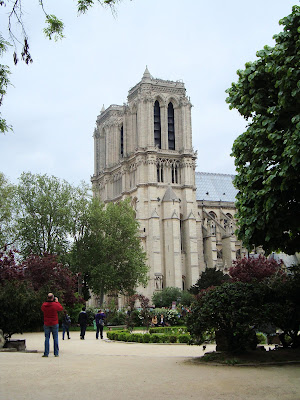