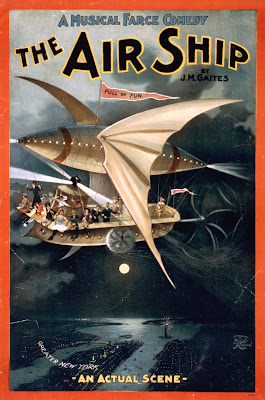 Dubbed "a musical farce comedy," it tapped into both the public fascination with powered flight and the Klondike Gold Rush, which were the current affairs of the year. Samuel Langley had just made two successful flights with steam-powered model aircraft in 1896, which flew almost a mile after being launched from a catapult. Assistant Secretary of the Navy, Theodore Roosevelt, became interested in possible military applications and began funding Langely's experiments. Meanwhile, a pair of civilians, Orville and Wilbur Wright, were only a few years off from their historic flight in Kitty Hawk. As the quest for the air was going on, hundreds of thousands of treasure-seekers clawed their way to the Klondike River in the Canadian Yukon Territory in the quest for gold. Unfortunately, by the time stampeding prospectors finally made their way across the treacherous Chilkoot Trail in 1897, most of the good sites had already been claimed. The North West Mounted Police - precursors to the Royal Canadian Mounted Police - acted quickly to ensure a peaceful and orderly gold rush, but hardship and hunger still plagued the Stampeders. Those who could eke out gold from the river bed and the hills became fabulously wealthy. Dawson City came to be called the "Paris of the North" and, practically overnight, the largest city west of Winnipeg. 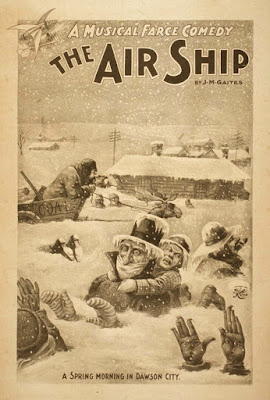 Gaites' musical opened with an inventor flying his airship to Alaska and discovering a lake whose shores were literally coated in gold. Sadly his heavy-laden craft went down on the way back, along with all knowledge of the lake's whereabouts. Undaunted, the inventor's nephew decided to try his hand at aeronautical adventure. Reaching Dawson City with a farcical crew of comic characters and buxom beauties, they eventually manage to find the gold and return home in a harrowing thunderstorm.

Critics decried what they perceived as a lack of plot, the show being carried by the music, dialogue, and effects. That is a familiar critique even today. Audiences, on the other hand, loved it. After its initial run in New York, The Air Ship went on tour and continued drawing full houses well into the 1910's. Of particular note were the air ship itself flying through the thunderstorm and the wintry scenes in Dawson, many celebrating these as masterful and as realistic as one supposes that a stage play can get.

With the advent of The Great War and the widespread use of military aircraft, attitudes towards fanciful flights from before the Wright Brothers changed. Like with Jules Verne and Georges Méliès, the public was no longer interested in Scientific Romanticism. The hard reality of industrialized warfare dashed those aspirations. J.M. Gaites' greatest fame still lay in his future though, writing Vaudeville routines for the Marx Brothers. 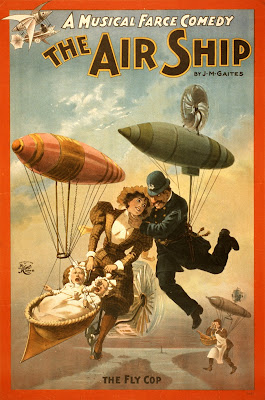